Today, we look at FID’S CRUSADE.

DISCLAIMER: This content has been provided to SHANNON MUIR’S INFINITE HOUSE OF BOOKS by Pump Up Your Book Tours. None of it reflects opinions of Shannon Muir. No compensation was received. This information required by the Federal Trade Commission. 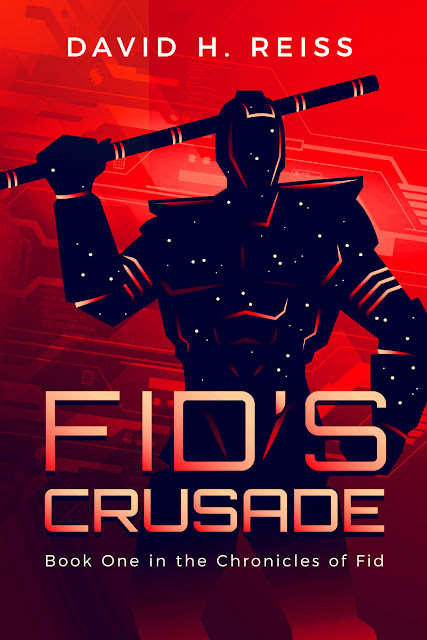 Consumed by grief, rage, and self-loathing, a brilliant inventor
rebuilt himself to take on a new identity: the powered-armor-wearing
supervillain, Doctor Fid. For twenty violent years, Fid has continued
his quest to punish heroes who he considers to be unworthy of their
accolades, and the Doctor has left a long trail of blood and misery in
his wake. After a personal tragedy, however, Doctor Fid investigates a
crime and uncovers a conspiracy so terrible that even he is taken aback.
Haunted by painful memories and profound guilt, the veteran
supervillain must risk everything to save the world that he once sought
to terrorize. Every battle takes its toll…but the stakes are too high
for retreat to be an option.

In the end, it may take a villain to save the entire Earth from those entrusted with the Earth’s protection.

“Fid’s Crusade by David H. Reiss is one of the most
refreshing and lively takes on the superhero genre I’ve seen in years.
His title character’s crusade is colorful, compelling, and takes
wonderfully unexpected turns, and the novel delivers an impressive
emotional punch (to go along with the super-powered ones). It stands
easily alongside other character-driven superhero novels like Austin
Grossman’s Soon I Will Be Invincible, Carrie Vaughn’s After the Golden Age, and Paul Tobin’s Prepare to Die!.” – Hugo award-winning author Tim Pratt 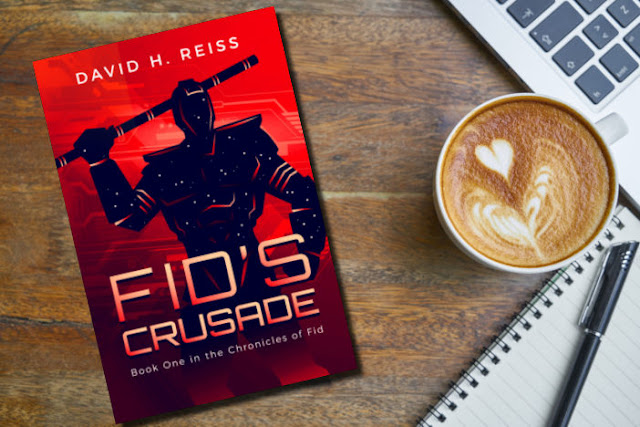 “I’m fine,” I informed Starnyx as
soon as he answered his highly-encrypted phone.
A swarm of medical automatons
surrounded the gurney on which I was reclined, a humming and swirling dervish
of blades, clamps, sponges and other surgical tools focused upon the stump of
my shoulder. A surgical laser was carefully burning away flesh in a pattern
that would increase the efficiency of repairs performed by the medical nanites
once my right arm was reattached.
The blended smell of disinfectant
and cooking meat had been disturbing at first, but I was beginning to get used
to the odor.
“Okay…?” Eric yawned. “Where are
you?”
“I’m back in Boston,”
I winced; a more significant cocktail of painkillers was now coursing through
my veins, but some discomfort remained. “I’m sorry, I forgot that you were
asleep when I left.”
“Nah, it’s almost morning. I can
wake up. What’s up?”
“I ran into some minor trouble on
my way home,” I forced a chuckle. “It will probably make the news and I didn’t
want you to worry.”
“Hold on, let me get to a
computer.” I heard tired, uncoordinated movement over the connection.
“It’s not as bad as it looks.”
Using my neural connection to the surgical control computer, I ordered one of
the robots to add another dose of topical anesthetic. “Really, I’m fine.”
“So, what happened?” Eric must
have reached his desk, because I could hear the clacking as he typed on his
keyboard.
“I ran into the Brooklyn Knights.”
“I think I’ve heard of them. New
guys, righ—” he paused mid-question and fell silent.
“Eric?”
“So, you’re fine then?” Nyx asked,
patiently.
“Absolutely,” I affirmed.
“I only ask, because the first hit
I get on recent news of Doctor Fid is shaky cel-phone footage of you with your
arm cut off,” he explained. “And I’m pretty sure you had both arms earlier
tonight.”
“Tis but a scratch?” I tried.
“Christ, Doc,” he sighed, “I’m not
doing Monty Python bits with you. Let me get dressed, I can be up in Boston
in a few hours.”
“Thank you,” I smiled gratefully.
“But, really, don’t bother. I’ll have my arm re-attached by then.”
There was another long pause.
“How?” Starnyx sounded
exasperated.
“Medical nanotechnology. I’ll have
function back in eight hours.” Which was a good thing, since my civilian
persona had a face-to-face meeting with the Governor of Connecticut this
afternoon to discuss opening a new research facility in Middletown.
“In twenty-four hours, I’ll be good as new.”
“You’re a scary man,” he chuckled,
relieved. “Okay, I get it. You’re fine.”
“I am.”
“Keep out of trouble, Doc, I’m
going to get back to bed. Stay in touch, yeah?”
“Of course.” It was an odd
feeling, having someone who cared for Doctor Fid’s wellbeing.
He hung up, and I closed my eyes
to think. 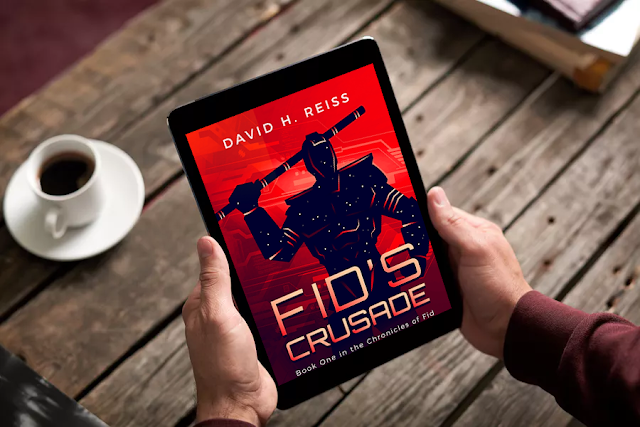 That’s a difficult question to answer because the interest was already well-established in my earliest childhood memories. I like to believe that the desire was instinctual: as soon as I was taught the alphabet, as soon as I discovered that letters could form words, that words coalesce into sentences…I knew.

I’m not certain if the move was a decision or if it was an evolution. Realistically, the shift occurred because I stumbled across a process and software package that helped me organize my thoughts for novel-length projects rather than the short stories that had dominated my prior efforts. Once I’d finished a novel or two, publication became inevitable.

First and foremost, I want my readers to be entertained. If my readers take away nothing more than a few hours of pleasure, I’ll consider myself a success.

That having been said, many of my works include characters who struggle with isolation and loneliness—the intense awareness of being an outsider, of having difficulty fitting in within society. For my readers who face similar hardships, I hope that they take away the awareness that even if they are an outsider…they aren’t alone.

The most rewarding aspect of writing is having readers. I absolutely adore getting feedback and chatting about my stories and characters with people who’ve enjoyed them.

The most challenging aspect of writing is finding time to write! I am intensely jealous of people who can just sit down in a coffee shop and begin to work. Honestly, I am most productive when I find moments of quiet solitude…which is hard to find when one has a full-time job, two housemates and two excitable cats.

My web page is at https://www.davidhreiss.com, and there is a contact form there that will relay messages. I always love hearing from my readers!

Also, I can be found on Facebook at: https://www.facebook.com/davidhreiss 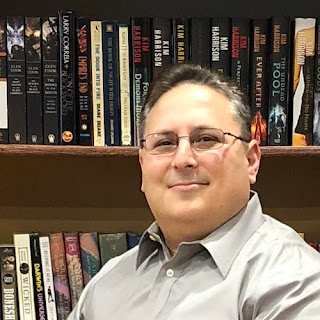 While growing up, David H. Reiss was that weird kid with his nose in a
book and his head in the clouds. He was the table-top role-playing game
geek, the comic-book nerd, the story-teller and dreamer.Fortunately, he hasn’t changed much.

David is a software engineer by trade and a long-time sci-fi and
fantasy devotee by passion, and he lives in Silicon Valley with his
partner of twenty-six years. Until recently, he also shared his life
with a disturbingly spoiled cat named Freya.
(Farewell, little huntress. You were loved. You are missed.)

David’s first book, Fid’s Crusade,
has just recently been published; this was his first novel-length
project, but it certainly won’t be his last—he’s having far too much
fun! 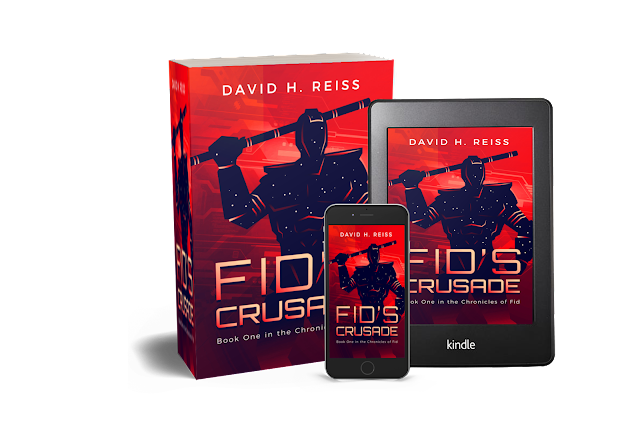