The SHANNON MUIR’S INFINITE HOUSE OF BOOKS column on Mondays and Wednesdays is a place at Shannon Muir’s author website showcasing books from a variety of fiction genres, with an emphasis on interviews and guest posts from other authors. One thing Shannon firmly believes in for readers not only to learn about new books available, but about those who craft the tales behind them. As its name implies, SHANNON MUIR’S INFINITE HOUSE OF BOOKS weekly column features writers from all genres of fiction who want their potential audience to get to know them, and their works, better. Today, we look at the GROWING FLOWERS collection.

DISCLAIMER: This content has been provided to SHANNON MUIR’S INFINITE HOUSE OF BOOKS by YA Bound Book Tours. No compensation was received. This information required by the Federal Trade Commission.
Welcome to my stop on the Growing Flowers: The Pete & Daisy Collection blog tour! 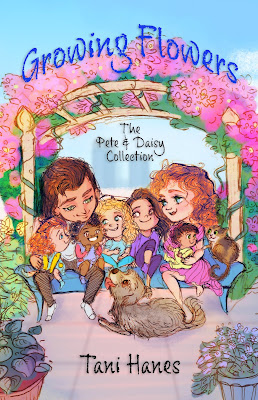 Growing Flowers (Flower Series Collection) by Tani Hanes Genre: NA Romance Release date: January 2019 Summary: When they meet, Pete is a student who needs a place to live, Daisy is a young woman in a family bind who needs a husband. She’s a bred and born New Yorker, he’s from the vineyards of Tuscany, but when they meet, sparks fly, as though they were meant to be. Follow our intrepid young couple as they navigate the treacherous waters of being newlyweds, new parents, and a vulnerable family unit trying to protect themselves and their children from the threats of an indifferent and sometimes cruel world.

Through four novels and numerous bonus chapters, our favorite couple and children learn to cope with an old flame, a stalker, wrenching loss, and simply growing up. Ten years pass from beginning to end, but the time flies by as everyone gets older and, hopefully, a little wiser in this loving and rollicking family unit.

I’m sure that most readers, upon seeing the title of this piece, are expecting a pithy, funny, missive a la I Don’t Know How She Does It, filled with humorous anecdotes about juggling a full-time job as a corporate lawyer with raising a child and churning out novels in my spare time. I myself have read lots of those, about free-basing coffee to stay awake while the magic flows from my fingertips to my iPad. If so, this is bound to be a disappointment, and I’m sorry.

To be sure, when I first started writing, we were still living in California, and I was a substitute teacher, so I mainly wrote after I’d given my high school kids their assignments, and in between telling them no, they couldn’t be excused to “run to Starbucks real quick” (yes, they really asked me that). So I kind of know what it’s like to multitask. Two and a half years ago, though, we moved to New York City, and through laziness and happenstance, I found myself unemployed. And we’re lucky enough to be able to afford that, at least for a little bit longer.

So here’s my typical day of writing: Wake up. Push cat off bed, get dressed, get coffee, and pretend to pay attention to the news while my husband has his coffee and gets ready for work. Try to stay awake until he leaves for work (one hour after I wake up). He finally leaves, and ahh, now the fun begins. Get more coffee, pull out crocheting (or knitting, if I’m feeling ambitious), find a channel that’s showing Friends all day, and settle down on the couch. Push cat off my lap from time to time. Eat a bagel. Head for my iPad after I’ve lit some candles to create “ambience” (did you know there are two ways to spell that word?) and gotten more coffee. Begin typing. Or writing, if you prefer. Push cat off keyboard. Spend ten minutes deciding if I want Friends in the background, or my go to writing playlist (One Direction). Take a break for lunch, which I eat while watching Friends. Look over my completed work (three paragraphs), decide it’s crap, and delete all of it. Sit down to really write this time. Push cat off keyboard again. Decide to read over some of my old stuff to see how it holds up. Settle down on couch to read. Fall asleep. Wake up when cat sits on my face. Oops, it’s getting dark already. Too late to get any writing done today. Whip up some dinner, watch some more Friends, and sit back in front of iPad when vestibule bell rings, so spouse thinks I’ve been working hard all day. And there you have it! Obviously I’m exaggerating, since I have managed to write twelve novels, but an awful lot of nothing does happen in the meantime. Only Moss, my cat, knows the whole story, and he’s not telling.

Individual Books in the Series:

About the Author
My name is Tani Hanes, and I am a 51 year old substitute teacher. I’m from central California and am a recent transplant to New York City. The most important things to know about me are that I’m punctual, I love grammar and sushi, and I’m very intolerant of intolerance. The least important things to know about me are that I like to knit and I couldn’t spell “acoustic” for 40 years. I’ve wanted to write since I was ten, and I finally did it. If you want to write, don’t wait as long as I did, it’s pointless, and very frustrating!
Author Links: