Today, find out more about MEWRANTERS: ATTACK OF THE SEA MONSTER.

DISCLAIMER: This content has been provided to SHANNON MUIR’S INFINITE HOUSE OF BOOKS by YA Bound Book Tours. No compensation was received. This information required by the Federal Trade Commission.
Welcome to my stop on the Mewranters: Attack of the Sea Monster blog tour! 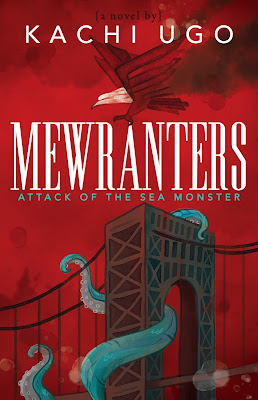 I’ll usually just listen to some music first to get myself all worked up emotionally. I like to listen to movie soundtracks and instrumentals too. They help my creative process.

When I think I’m ready, I’ll briefly go over what I’ve written already. If I have a plot, I’ll read the plot. If not, I’ll try projecting what’s going to happen next.

I like to write in chapters. That means more often than not my writing day starts with a new chapter and ends when the chapter is completed. If I feel I still have a lot of creative energy flowing, I’ll take up writing another chapter. But I’ll have to finish it otherwise I’ll have to come back to it later in the day.

That basically is my typical writing day.

Even though he heard her voice in his mind, he
knew it was a command, not a request. He leaped into the air, spreading his
wings full length. The air seemed to cling to his form, pushing him upwards. He
didn’t need to flap. He shot to the clouds, his shame melting into excitement.
His family and the osprey followed behind, instructing him. Kachi Ugo’s whole life has revolved around writing. When he was twelve, while his friends still flipped through picture books and comics, he took an interest in thick, picture-less “story books” that opened him up to a whole new world of possibilities and adventures. A decade later, he writes those same books himself. Kachi Ugo is an avid supporter of YA Fantasy. For him, writing is a passion. He relishes the power it gives him to create worlds of his own where anything and everything is possible.
Author Links:

One Reply to “BLOG TOUR – Mewranters: Attack of the Sea Monster”