Today, find out more about SHORE.

DISCLAIMER: This content has been provided to SHANNON MUIR’S INFINITE HOUSE OF BOOKS by YA Bound Book Tours. No compensation was received. This information required by the Federal Trade Commission.
Check out my stop on the Shore tour! 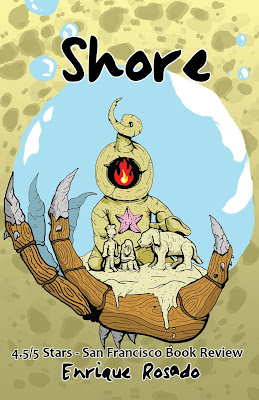 Lahar’s life was regular- college, work, then binge watch whatever was in her queue. That was until she woke up in a new land. She meets a young wizard named Arena, who has made a home on the beach. With the help of his massive dog and mystical creatures called wisps, she must find a way back home while she fights the forces of a monster who lives among them. Join this Fantasy adventure, with new creatures to see and adventures to be had.

“4.5/5 Stars … a truly quirky and unique read that will be a new favorite for fantasy lovers.” – San Francisco Book Review

The kindle edition is on sale for only $0.99 through November 16th! It jumps up to $1.99 til November 19th until returning to it’s regular pricing.
If you have Kindle Unlimited you will be able to read the book free anytime you want!
Buy on Amazon!
Guest Post by the Author

What’s up everyone, I am Enrique Rosado. I am the author of the novel “Shore.” I spend most of my time writing, probably something you hear a lot from other authors. You would assume then that I have my writing style, and schedule fine-tuned. That like any other job, I should have this down like clockwork and churn out words like they were on a conveyer belt. Why wouldn’t I, I said I spend most of my time writing. Well, let me share a typical writing day.

I would love to say my typical writing day is waking up early, well rested with the enthusiasm to tackle the day. Well, no. More often I will wake up late, closer to noon than morning. I end up spending too much time looking emails and videos on YouTube as I lay in bed trying to gain the strength to leave it.

I grab a cup of coffee, Irish creamer all day. I watch an episode of whatever I am watching on Netflix, Hulu, or VRV. You can tell by now that I am a slow starter, but I swear I am productive. Then I bust out the tablet and get ready for work, either at my desk or on days I feel I need to leave my home I go to the library, coffee shop, bar, any place that won’t kick me out for spending hours at a table to write.

I try to reach the goal for the day like, edit page x-to-y, write this chapter, write this many words, plot out what happens, you get the idea. More days than not I won’t reach that goal and that’s fine. One stigma of writing is that you must spend your whole day writing and do that every day. Don’t do that, you will burn yourself out.

Any good writer gains experience from life itself. Go hang out with friends, watch a movie or show on your list, go to that place you’ve been dying to eat at or read something that you said you wanted to a month ago.

Any good writing day has a moment or is preceded by a day of self-care. Your mind is your best tool, and we all have days where we run it rampant, I have found myself on days where I’ve written past midnight. That’s fine, and I am proud when I accomplish a large chunk of my writing, but I wouldn’t be able to achieve that at a quality I am proud of if I didn’t allow myself some time for self-care.

So, one day I write, I try to write a specific amount and if I can go further, then you know I will. On days I just make it or can’t push myself to continue, I don’t. I take my time to let my mind recover, spend time with the people I like and see new places. I live my life. When I’m recharged, I go back to my laptop and write something worth reading.

I’m Enrique Rosado, a Puerto Rican who grew up on the island for a bit before landing in Killeen, Texas, a town that cultivated me and made me who I am today. Now I find myself in New York City writing any chance I get.