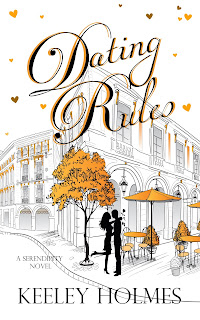 Dating Rules
Serendipity Series
Book Two
Keeley Holmes
Genre: Sexy romantic comedy
Publisher: KH Novels
Date of Publication: 29th May 2018
ISBN: 9781986752664
Number of pages: 289
Word Count: 51k
Cover Artist: Keeley Holmes
Book Description:
Losing control is not an option for Izzy Shaw, something past experience has taught her. When you’re not in control, bad things happen. So when Parker Cole comes bustling into her life with his carefree manner, no full time job and his terrible Hawaiian shirts, she knows she should stay away.
For Parker, seeing Izzy at Penelope’s wedding stirred something in him. Izzy intrigues him. She’s attracted to him but she holds back and she doesn’t realise he sees this as a challenge. Usually when he wants something, he goes for it.
For Izzy, being attracted to a man and allowing herself to act upon it is defined by her rules. She lives by her rules, they protect her…
Parker is a rule breaker.
Over the course of 10 dates Parker has to persuade Izzy that he’s worth the risk, he has to persuade her that sometimes life doesn’t have to be all about rules, sometimes you have to walk on the edge to really appreciate living…
He will prove this to her, one date at a time.
Amazon UK     Amazon     Amazon CA     Amazon AU      Kobo


Interview with the Author:

I’ve always ben creative, but the turning point came when I did work experience in a publishing house when I was 15. They gave me a chance to write a book and have it published by them. I relished in it and since that day its been my passion to write for people.

Once I saw my name on the published book when I did work experience, I knew that I wanted to see my name on a book for the rest of my life. It’s such an achievement and I love it when people enjoy my work.

A happiness and appreciation of those around them. The theme in my books always surround the importance of family and friends. They always have a good support system ready to back them up when the time comes and I want my readers to appreciate that. I want them to see that they are not alone and that they always have someone there for them, to laugh, to cry, to share a bottle of wine with!

When my readers love it. There’s nothing better than connecting with those who feel something after reading your books. It makes all those late night, early morning and hair pulling moments worthwhile LOL

The first chapter. Without a doubt, that is the hardest thing. I plot out my chapters, chapter by chapter, so I know what will happen, but my mind is taken up with my previous character, so that first chapter I find it really hard to get into the new characters head, to find their voice. After that, it gets easier 😊

Read as much as you can, it’s research. And then when you write, expect the first thing you write to be a pile of rubbish. First drafts are terrible, build on it. Nurture it. It will get better. Just keep going. Good things are hard to get, but so worth it!

Any way they want to! 😊 They can find me being rather crazy on Facebook and Instagram. They should come and join me in my author group on Facebook, I’m always talking and interacting, I also LOVE to give away prizes 😊

Excerpt 3:
“There they are!!
Are you ready for this?” Daniel asked as he handed me a gun. He was grinning
like an idiot, the green of his eyes twinkling.
“What the fuck…?” Why had Daniel just
passed me a gun? Did they seriously believe I would take part in this?
“Paintballing. This is our third date.”
Parker looked at me only once and then addressed all of my friends.
“Rachel?” I looked at my work colleague,
shocked to see her here.
“I was invited. I’ve never done this before
so it should be fun.”
This was not my definition of fun. Plus,
why would a date include everyone else? Unless he didn’t want to be alone with
me? And, importantly, why would a date include the pain from getting shot?
“So, we’re teaming up. I figured we could team
up, men against the women and see who are the strongest.”
“What? That’s not fair!” Paige protested.
“Scared?” Mark, Penelope’s husband, mocked.

“No…” Paige sneered. “I’ll smack you into
the ground.”
“And I’ll help do it, darling,” Penelope laughed.

I stood back and watched as Parker instructed
them. I was surprised to see Frank here; I was shocked that he could get away
from Daniel’s evil aunt long enough to be here. I didn’t know the other man in
the group but his eyes were as red as rubies as he focused on Parker. His
purple hair was already squashed under the helmet. Strange colours for eyes and
hair, but it suited him.
Parker brought me back to reality by
throwing a helmet my way.
Rather harshly, I might add.
“So,” he continued. “You need to wear this
and I guess the one rule is to try and aim above the groin.”
“No can do, I’m afraid,” Lacey grinned.
“What?” Malcolm asked.
I saw the way Lacey flashed a quick smile
at Malcolm. I’d seen Lacey flirt of course, but not like this. There was an
anger behind that smile. Some flirt. More anger. Who was this man, and what had
he done to my friend? He was the man crisis she was going through.  “And you are?” I asked.
“Oh, sorry, I’m Malcolm.”
“And how do we know you?”
“He’s a client of mine but he’s also an old
family friend,” Daniel informed me.
An old friend of Daniel’s? How did he know
Lacey?
“I can only agree to keep it above the
groin if you agree not to hit my tits,” Lacey told him.
“You appear quite ample in that area, so it
could get quite hard.”
“Hmmm…I’m sure we wouldn’t notice even if
it did get hard…” Lacey mocked.
Well shit. That got heated very quickly.
Cock talk, already… Jesus.
Malcolm’s eyes sparkled with the challenge,
but he didn’t say anything.
Wise.
Jake chuckled; breaking the tension. “Your
tits take up half your body, where are we going to hit?”
Lacey shrugged. “We can hit the groin then.
Learn to cover it otherwise you won’t be using it.”
The other ladies laughed as the men smirked
sheepishly.
“Fine, one shot,” Parker conceded. “That’s
all you get. I know you, you’ll continue to fire at my dick because you love it
so much.” He aimed that comment at me.
“Funny way to show love,” Frank murmured
and shuddered.
“One shot, no matter where, and you’re out.
Agreed?”
They all nodded. Parker turned to me.
“Watch me kick arse out there.”
“Not likely!” I scoffed.
“Watch your tits,” Mark added.
Penelope flipped her husband the middle
finger and turned to them. “Right, they might be stronger than us physically,
but we’re more cunning… we could use that…but then, this is shooting and
men can shoot and they’re stronger… Shit.”
“Great motivational speech, Pen. Just fire
at anything and everything that moves,” I hissed.
They nodded their heads and waited for the
whistle. It blew, and the shooting started.
I crouched and ran to the nearest safe
area. Balls whizzed past my head. A thought that should never enter one’s mind,
but it made me grin.
Someone screamed. “Fuck that hurts!!”
Gasping, I turned and could see Paige sat
on the floor holding her leg and rocking back and forth trying to throw off the
pain. If it hurt that bad, I wasn’t going to get hit.
I shifted my feet and peered over the
obstacle I’d hidden behind. I could see a leg near a pile of tires. How did I know
who those legs belonged to? It could be one of the girls… I breathed deeply, my
eyes surveying the area. Red showed as the leg moved. Red coat. That meant it
was Mark.
I lifted my gun and held my breath before I
pulled the trigger.
“Fuck!” Mark bellowed.
“Yeah, baby! You’re out!” Penelope called
from her hiding spot.
Shots were fired her way which made Penelope
duck and run for cover behind a tree.
Shit.
My heart was beating so fast that the fear
actually made my legs feel numb. How the hell did you run on jelly legs?
Who would pick this for a date? It’s
fucking terrifying…and strangely exhilarating.
Parker hit the mark again.
“Ow! What the fuck!” Lacey yelled.
“You snooze, you lose!” Jake hollered.
I found myself grinning as I turned and aimed
my gun at a very open Jake. I fired. It hit the mark, dead centre in his chest.

“Sweet Jesus!”
“You rhyme, you die!” I turned quickly and
hid behind the tree, grinning as Lacey and Jake left the area.
Penelope
screamed and then seconds later, Malcolm cursed. They were dropping like flies
and this meant I had a chance of winning.
About the Author:
Keeley Holmes is the author of sexy romantic comedies and NA books. She loved writing so much that whilst her friends were off doing work experience in schools and child care placements, she was doing hers in a publishing house. That was when she wrote her first book at 15, it was set in America and it was about a murdering woman with a glass eye… Number one bestseller…
After working full time and gaining her English Literature and Language degree, she changed her mind about becoming a teacher, when would she write books if she had to mark them? Instead she wrote her second book in 2007. From that moment, she’s written books as a side hobby and now she wants the world to read and love them! She’s a sucker for a romance books, with a little bit (a lot!) of kink in them!
She lives in beautiful Yorkshire, when sometimes she leaves the house and appreciates that beauty, before crawling back into her cave to write.
www.keeleyholmes.com
https://www.facebook.com/Keeley.Holmes.author/
https://twitter.com/keeley_Holmes86
https://www.instagram.com/keeleyholmesauthor/
https://www.goodreads.com/author/show/6552662.Keeley_Holmes