Every Friday this month features a “blast from the past” as SHANNON MUIR’S INFINITE HOUSE OF BOOKS revives a feature from its former incarnation for one month. YOUNG ADULT FRIDAYS focus on books from a variety of genres, geared to this audience. This week, learn more about WHEN THEY CAME by Kody Boyle.

DISCLAIMER: This content has been provided to this site by YA Bound Book Tours. No compensation was received. This information required by the Federal Trade Commission. 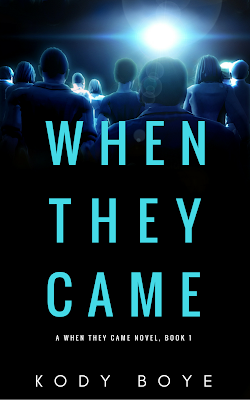 When They Came
by Kody Boye
Genre: YA Sci-fi/Dystopian
Release date: April 3rd 2017

I was never afraid of monsters—at least, not until They came: the visitors from outer space. Now They’re in our skies, on our streets, always watching, forever waiting. At seventeen, I’m just about to graduate from the Juvenile Education System and declare my career of choice. The Midnight Guard—who protect our community from the vicious things that lie outside our walls—calls to me. It’s hard, dangerous work, with grueling hours that offer little sleep, but it’s the one thing I know will help make a difference in our ever-changing world. 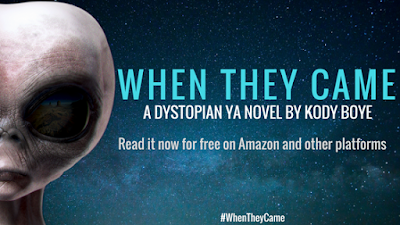 Now PERMA-FREE on Amazon!
Excerpt
When They came, the story began, we thought They were our salvation. We thought They’d give us energy, heal our sick, solve world hunger. Instead, the story would continue, They didn’t. This was the point where I usually stopped listening—because, after hearing it one-hundred-thousand times over the past few years, it was never told any differently. The story never changed. The point was never made any clearer.
When They came, it should’ve began, They only had one thing on Their minds:
Our destruction.
Sadly, this was the story I had to listen to on my final day in the Juvenile Education System—when, after studying a generalized curriculum for several agonizing years, I would finally be emancipated and graduate into the Adult Work Force at the age of seventeen. It wasn’t my idea of a ‘final hurrah,’ but at least it beat a test.
“Ana Mia Sofia Berrios!” The teacher slapped the edge of my desk with his pointer stick hard enough to jar me out of my thoughts. “Pay attention!”
I instinctively drew my hands away and set them in my lap without response. Mr. He merely nodded before pulling a projecting screen from the ceiling. “Now,” he continued, making sure to catch my eye as he turned to survey the room of twenty students. “We are all aware of the events that began on September 17th, 2024—when we finally established First Contact with an extraterrestrial civilization. What we couldn’t have anticipated was the fallout that would occur thereafter.”
Mr. He rounded the stool the battery-projector lay upon. His eyes held a certain sadness. “It is my responsibility, as a senior educator of the Juvenile Education System, to relate to you one final time the dangers that exist outside the walls of Fort Hope.”
His trembling fingers searched for the projector’s ON/OFF button as his eyes remained fixed on us.
He didn’t want to do it. That much was clear. He didn’t want to push that button and reveal to us the one thing that haunted our memories, our dreams, our every waking moment. But it didn’t matter. He had to do it. It was required—actually mandated—that we see the things that lay outside our walls. But for people like me—who’d happened to live through, survive, and still dreamed about it—I could already see it as his index finger pressed the button: lingering in the shadows, waiting for a moment to strike, watching, waiting, anticipating, breathing with only a wheeze as it lifted its hands to turn the doorknob and step right into my—
The projector came on.
I wanted to scream.
But somehow—someway—I managed to hold it in as its image filled the screen.
About the Author
Born and raised in Southeastern Idaho, Kody Boye began his writing career at fourteen with the publication of his story [A] Prom Queen’s Revenge in the Yellow Mama Webzine.
After being published nearly three-dozen times in various markets, he went independent at eighteen and currently writes horror and dark fantasy fiction.
He is the author of the young-adult science-fiction series When They Came, The Adventures of Carmen Delarosa, and the Scarlet Jane Files.
He currently lives and writes in the greater Dallas, Texas area.
Author Links: 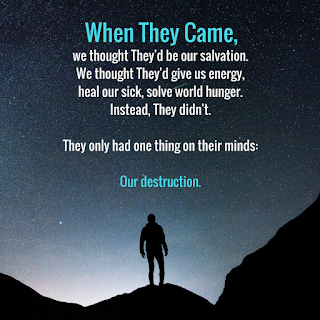 GIVEAWAY (Continental US only): 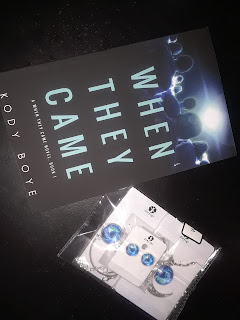