Today, we look at A LADY’S VIRTUE.

DISCLAIMER: This content has been provided to SHANNON MUIR’S INFINITE HOUSE OF BOOKS by Pump Up Your Book Tours, including the guest review. None of it reflects opinions of Shannon Muir. No compensation was received. This information required by the Federal Trade Commission. 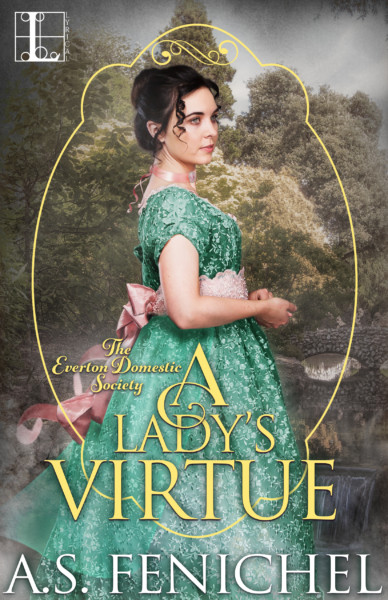 Can a broken engagement ignite the spark of true love?

Sylvia Dowder had almost made it to the altar when her fiancé
unexpectedly became a viscount, and dropped her like a stale crumpet to
make a more “suitable” match. Though Sylvia’s heart has been crushed,
her spirit has not. She puts her wits and social savvy to use as a
secret gossip columnist—and as the Everton Domestic Society’s party
planner to the ton. Luckily, she’s not in danger of ever falling for an aristocrat again…

Especially not one like Anthony Braighton, Earl of Grafton. Raised in
America, Anthony sees no reason to marry when he can enjoy all the
perks of being an eligible earl. Determined to convince his family he
doesn’t need a wife, he hires Sylvia to act as hostess and decorator for
upcoming parties. Yet Sylvia is as adept at captivating his interest as
she is at beautifying his home. And despite this Everton lady’s
aversion to titled men, some attractions can’t be denied—and love rarely
does go where it’s told . . . 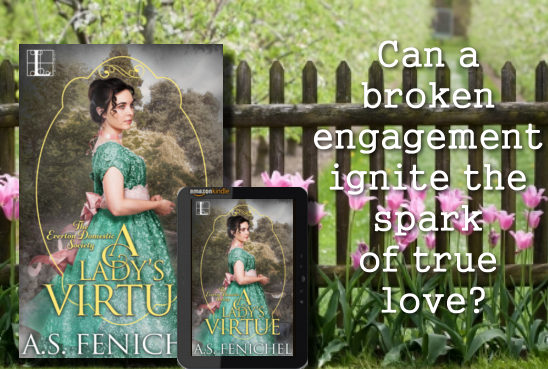 Late again,
Sylvia Dowder ran down the stairs at the Everton
Domestic Society as if her skirts
were on fire. It was impossible to read her handwritten
pages while moving at such a pace, but she needed to send her article to the Weekly
Whisper’s editor before the day was out. She’d
been late last month and nearly lost her post at the newspaper.
At the bottom of the stairs, she noted her failure to
sign the article. Quill in hand, she dripped ink
on her brown skirt, leaned on
the banister and scribbled Mable Tattler at the bottom. She would ask Gray to
have  a footman carry it to Free Market Square. Jumping down the last step brought her up against a
wall that toppled her to the floor.
Stunned, she lay still
with her papers strewn around her and the light from the transom windows
blocked by whatever had felled her.
A masculine, ungloved hand
reached toward her. “I’m terribly
sorry, miss. Entirely my fault. Are you hurt?” His accent was strange, American
perhaps. Having no gloves on, she was hesitant to touch him, but there was no help for it. She couldn’t
remain on her back like a turtle.
The warmth of his skin traveled up her arm, and her cheeks heated. His fingers were strong
and rough. This was no gentleman’s hand. She stood as he eased her to
her feet. “Not at all,” she said. “I was
distracted.”
He towered over her. At
her full height of barely over five feet, she craned her neck and was frozen
by the most stunning pair of golden
eyes, olive skin and full lips.
She blinked to focus on the whole rather than the parts. “Anthony Braighton?”
He bowed over her hand, which he still held firmly
in his. “Lady Serena or Sylvia? I’m
afraid I don’t know.”
The mention
of her twin’s
name brought reality
crashing back on Sylvia.
She pulled her hand back and made a curtsy. “A
common mistake, sir. I am Sylvia Dowder.
My sister is still living at home.”
Cocking his head, he
gawked at her. “And you are now living here at Everton House, Miss Dowder?”
“I have joined the
Society.” While he seemed only curious, it still rubbed her wrong, and she forced herself not to defend her
decisions. Anthony Braighton was just a rich gentleman from America. His opinion didn’t
mean anything.
“Because of Lord March?”
The problem with Americans
was they said exactly what
they thought rather than keeping a conversation
polite. Sylvia bit down on the inside of her
cheek. The last thing she wanted was to recount the demise of her engagement to Hunter Gautier, the current
Viscount of March. She had been so close to the altar
before disaster struck. No. She wouldn’t think about that anymore. “My reasons are not
your concern, Mr. Braighton. If you’ll excuse me, I have to see the butler.”
His eyes were wide. “Have I been rude, Miss Dowder? I assure you,
it was not my
intention. I only meant to convey that March’s treatment of you was abominable
and no one blames you.”
Despite his effort to make things
better, his mention
of what everyone in London knew of her life and failure only exacerbated her mortification.
Still, she could see he was sincere, if mistaken. “There is no harm, Mr. Braighton. I am uninjured.”
“I am pleased to hear that.
It seems I have a bad habit of offending the English with regularity.” His smile
created the most charming dimple in his left cheek, and his eyes sparkled with mischief.

If she were honest, she did not mind looking
at Anthony Braighton.

Best
not to be too honest. “I am made of tougher
stuff than most.” “Indeed.” That dimple
deepened, and he raised an eyebrow.
Looking at
the pages in her hand,
he said, “I’m keeping you from
something. Forgive me. I was on my way to see Lady Jane Everton.”
Curiosity over what troubles
might bring a rich young man to the Everton
Domestic Society warred
with her need to have her article
delivered to her editor before her deadline passed.
Her training as a lady won the battle.
She gestured toward the hallway, which led behind
the stairs. “Lady Jane’s office is the first door on the right.”
“Thank you, Miss
Dowder. Very nice to see you again.” “And you, Mr. Braighton. If you will
excuse me.”
He bowed, and she
rushed from the foyer to find Gray, the Evertons’ aging butler. 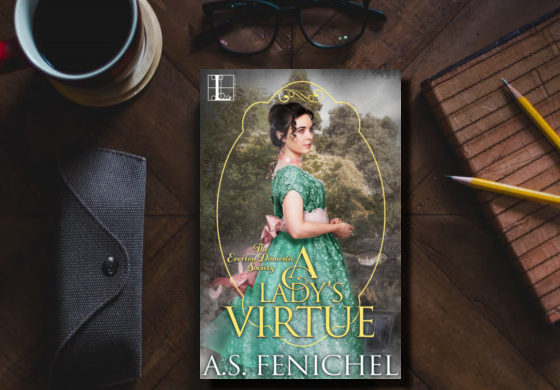 A.S. – I always had stories in my head. I started writing them down in my twenties when my first husband took a night shift and I was lonely. This was also when I started reading ravenously. (not a coincidence)

A.S. – It was my goal from the moment I started writing. It took me many years before a publisher showed interest.

A.S. – I write stories about strong women. Sometimes it harder to see their strength, but they each have a way of getting what they want even if they don’t always know what that is from the start. I hope people see there are many ways to be empowered as a woman regardless of the era.

A.S. – Creating a world for my characters to thrive and fall in love. It’s the most satisfying thing to give birth to these fabulous people and give them a way to find the perfect love and happiness.

A.S. – The business end of being an author is very difficult to navigate. It can sometimes stall the creative flow. When that happens, it’s hard to get in story mode and take my characters on their journey. It’s like the two sides of my brain are battling for supremacy. The business end is necessary, but it doesn’t mesh with the actual job of telling a story from the heart.

A.S. – Hone your craft. Take classes. Attend workshops. Meet other writers who will be your support group. This is a difficult business and you need to have sounding-boards to help you through. Join a writing group if there’s one in your area. 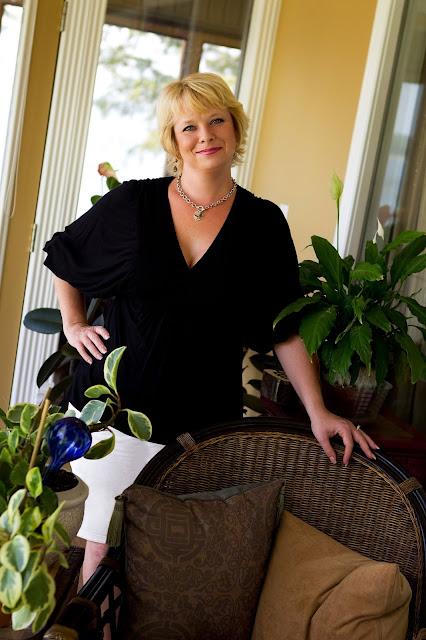 A.S. Fenichel gave up a successful career in New York City to follow her husband to Texas and pursue her lifelong dream of being a professional writer. She’s never looked back.
A.S.
adores writing stories filled with love, passion, desire, magic and
maybe a little mayhem tossed in for good measure. Books have always been
her perfect escape and she still relishes diving into one and staying
up all night to finish a good story.
Multi-published
in historical, paranormal, erotic and contemporary romance, A.S. is the
author of The Forever Brides series, the Everton Domestic Society
series, and more. With several books currently contracted, A.S. will be
bringing you her brand of edgy romance for years to come.
Originally from New York, she grew up in New Jersey, and now lives in the Southern Missouri
with her real-life hero, her wonderful husband. When not reading or
writing she enjoys cooking, travel, history, puttering in her garden and
spoiling her fussy cat. 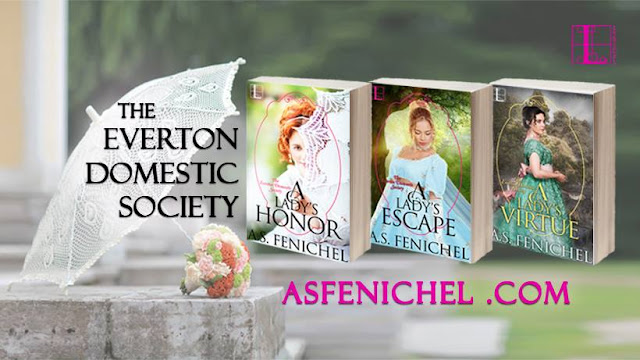