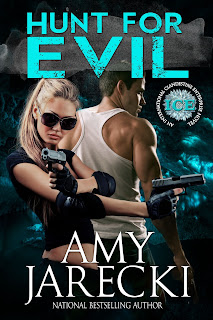 Hunt for Evil
ICE Book One
Amy Jarecki
Genre: Romantic suspense
Date of Publication:  August 1st, 2017
ISBN: 9781942442257
ASIN: B071JS2JST
Number of pages: 340
Word Count: 90,000
Cover Artist: Dar Albert
Tagline: Who knew battling international terrorism would lead to ravenous passion?
Book Description:
When Navy SEAL Commander Logan Rodgers winds up on a botched mission in the Gulf of Oman, his quick action in saving MI6 asset, Olivia Hamilton, brings him to the attention of the international espionage arena.
Recruited by the mysterious and elite International Clandestine Enterprise (ICE), Logan faces Olivia again, but this time they’re on the same team. Sparks fly as the two compete in a clash between skill and keen intellect, until a French girl is kidnapped by a suspected terrorist.
Posing a married couple, steam erupts between the pair while Logan and Olivia dive deeper into an ISIS kidnapping ring. But when Olivia becomes the kidnapper’s next victim, she enters a madman’s hell. And as Logan races against time to save her, one thing ravages his soul. If he fails, the woman he loves will be lost to him forever.
Intro Price .99
Amazon      Kobo      BN      Apple
Interview with the Author:

I have always loved to write from the first day I picked up a pencil, but I didn’t write my first novel until the late 90’s. After I took writing classes and went to conferences, but wasn’t published until 2011.

My third manuscript, a Native American historical novel, was picked up by a small press (Boy Man Chief). It sold about 250 copies, but won The Spark Book Award and the Utah League of Writer’s award for Best Manuscript. The awards gave me the confidence to keep writing!

I want readers to be transported to a world of danger and passion. If they feel like they’re living through the adventures of the characters, then I’ve done my job.

I get to work in my pajamas. LOL. Honestly, I finally have a job that I love and I get to deliver fantastical stories to readers all over the world.

Distractions. Every day there are things that take me away from working on my next book. The mind boggles at the things authors must do to stay on top of the game—social media, marketing, editing, reading, writing copy, and participating in things like blog tours J

Write the best book you can, and write another. If you’re not published, start a blog and post once a week. Participate in Facebook groups with people who read and write in your genre. And most of all, have fun!

I love connecting with readers and try to hop online at least once a day:

Her heart nearly
stopped when a hand slid over her mouth and another disarmed her. “I’m
Commander Rodgers from the USS Washington, and you’re coming with me now,” an
American growled in her ear. From the girth pressing against her back, he was
solid—but Olivia could take him.
Grinding her
teeth, she threw an elbow to his sternum. He blocked—so like a hotshot. Few
people were fast enough to react to one of her strikes. But she’d nail him with
her second try. Whipping around, she aimed a kick at his groin, but he blocked
that, too. At least six-two and faster than an asp, Rodgers stopped her next
kick by catching her ankle and giving it a twist—a warning.
“Enough. Come.”
Jesus Christ, his eyes were the color of a teal lagoon and they drilled into
her like daggers.
She shook her
head. God, she wasn’t about to go anywhere with dagger-eyes. Not without a
fight.
Suited up in
scuba gear, his facemask cocked atop his head, the man had to be daft. “What
the fuck, Aquaman?” she whisper-shouted. “If anyone sees you, we’ll both be
shot before the first question’s asked.”
His eyebrows
slanted downward over those damned eyes. “Yeah?” he whisper-shouted back.
“Everyone on this boat will be dead in fifteen. If you want to live, you’ll do
as I say.”
Olivia’s mouth
went dry. She blinked, shaking her head. He had to be mistaken. One more day
and al-Umari’s ass would be hers. “Are you off your trolley? I’ve put too much
into this project to have it blown to smithereens. Call off your dogs before
you cock-up the entire op. Now.”
“No can do,” he
said like her hard-earned cover wasn’t about to become the greatest wipeout in
MI6 history. “Sorry to ruin your party, but there’s a bomb attached to the
hull. Can’t be killed, can’t be dislodged, and if you stand here arguing with
me for one more second, you’ll explode into so many pieces, you won’t make a
meal for a goddamned minnow.”
Those are my
choices?
“Christ!” She
jammed her finger under his nose. “When this is over, your ass is mine.”
Book Two in the ICE series, BODY SHOT, will release on August 29th 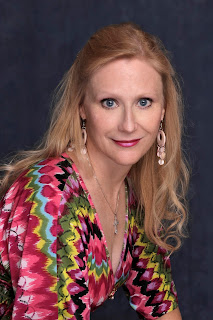 About the Author:
Amy embarked on her writing journey shortly after she completed an MBA with Heriot-Watt University in Edinburgh, Scotland. Her first manuscripts were suspense novels and were never published. She calls them baptism by fire—lessons in learning to write fiction. These lessons, combined with several writing conferences and classes, led her to write her first published book, Boy Man Chief, which won the League of Utah Writers award for Best Manuscript, and the Spark Book Award.
A lot has happened since, with some of the highlights being Rise of a Legend winning the national RONE award for Best Time Travel; hitting the Amazon Top 100 Bestseller list; and a host of other accolades.
Amy enjoys the freedom of authorship and the opportunity to work creatively every day. She has lived in Australia, Bermuda and has spent extensive time in Scotland. Whenever possible, she visits the places she writes about to add vibrant realism to her stories.
She loves writing Scottish historical romance, and now she’s adding romantic suspense to the mix. Come along for the ride!
Website: http://amyjarecki.com
Twitter: https://twitter.com/amyjarecki
Facebook: https://www.facebook.com/amyjarecki/
Goodreads: https://www.goodreads.com/author/show/5306959.Amy_Jarecki
Instagram: @jareckiamy 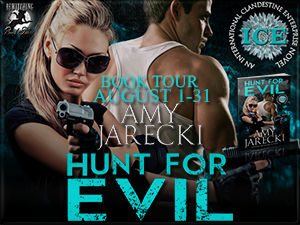 One Reply to “INFINITE HOUSE OF BOOKS FLASHBACK: BLOG TOUR – Hunt For Evil”