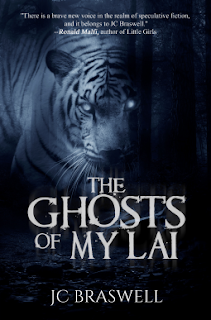 The Ghosts of My Lai
JC Braswell
Genre: Supernatural Thriller
Publisher: Magothy Publishing
Date of Publication: April 20, 2017
ISBN: 0-9979909-3-5 (Paperback)
ISBN: 0-9979909-2-9 (eBook)
ASIN: B06XNVPB2P
Number of pages: 264
Word Count: 89,700
Cover Artist: Marcy Arnold
Book Description:
Lieutenant Chris Williams and his platoon flee My Lai—the site of an unfathomable massacre during the Vietnam War—only to have their helicopter shot down over unchartered jungle. Disoriented and separated from the outside world, Williams faces the unenviable task of navigating the waylaid band of survivors to safety. But Vietnam has other plans…
Fear begins to trump logic. Specters of the assault call for them during the jungle nights. The escape mission descends in to mutiny as they discover an unknown threat unlike the Viet Cong hunts them from within the primitive environment.
Williams soon realizes that survival is not possible without first confronting the ghosts of My Lai…and the sins of their past.
Amazon
Interview with the Author

An overactive imagination. I’ve been writing short stories since I was in elementary school, sometimes to the detriment of my grades.  I can’t tell you how often my teachers caught me daydreaming. Then I started drafting novels back in law school. It wasn’t until ten years ago when I started taking it seriously.  Seventeen novels later and I don’t intend to look back.

Then there’s also the power of the written word. With writing you can convey a message without beating someone over the head with it. There’s a reason why the classics stick out.

It has nothing to do with being validated by big publishers. The publishing industry is in such a state of flux with e-books, self-pubbed authors, and the, well, we’ll call it the mentality of the decision makers. You have a flood of liberal arts majors acting as barriers to writers. Most come across as political zealots who can’t see the forest through the trees they want to plant. I’ve read several interviews by agents, etc. The whole “need diverse writers/books” is a joke.

At some point I hope I’m validated as an author, but I don’t know when that is. I would hate for 2 million words to go to waste.

I’m not that important to think that I can influence a reader into taking away a certain message, but I hope at some point I do. Most of my novels are about self-discovery, the gray areas of human nature, faith, and redemption. I make no bones about my subtle messages in my books.

My Lai is a perfect example of my writing. You have a protagonist who battles his internal guilt while trying to hold a small band of soldiers together. Most of us deal with stressful on a daily basis. We try to hold our families together while dealing with internal strife. It also makes us grow as individuals, at least those of us who don’t take the easy way out.

Unfortunately, modern society says a pill can solve everything. Our culture has climbed mountains of adversity without the help of pills in the past. I also find it quite troubling that media romanticizes terrible outcomes, including suicide. Terrible, just terrible.

It certainly isn’t the money.

Readers who ask questions about the characters I write, especially those characters whose fate remain uncertain. It’s pretty cool to see someone really like my books. It really is.

Loneliness until the characters take over. Sometimes it’s difficult. I’m not going to lie, sometimes the minute details of grammar is a pain.

Also, don’t get into it for the fame or the money.  Go into computer programming for that.

Email me at jc@jcbrasewell. That’s the easiest way. My website is www.jcbraswell.com. All of my other contact information is there. 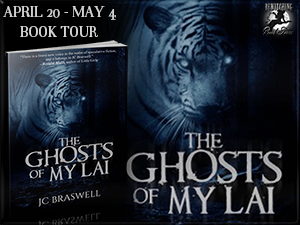