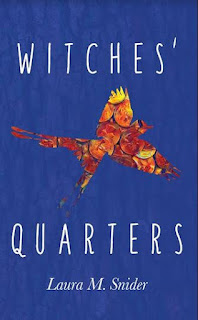 
Genre: YA fantasy
Publisher: Clear Fork Publishing
Date of Publication: 10/8/18
ISBN: 978-1946101792
Number of pages: 336
Word Count: 85,655
Tagline: Greed and inequality leads to bloodshed in the mythical world of Nova.
Book Description:
Charlotte’s parents are fighting again. As the oldest of four children, Charlotte needs something to distract her three siblings. June, the youngest, takes a quarter from a bag and drops it in a tree-shaped coin bank. But these are no ordinary quarters. The kids are transported to a new world – one that resembles the scene on the back of the coin.
That world is Nova, and Nova is at war. The four siblings are now thrust into the middle of this war between the witches and the animal warriors. A raccoon named Ringo offers a way home – but the kids must first fight alongside the animals. Younger sister Ava wants to fight. Charlotte doesn’t trust the warriors and wants to look for her own way out.
Charlotte and Ava become separated when they each follow their instincts. On their own, each girl discovers mysteries about Nova that place their family in peril. Now Charlotte and Ava have to find one another again – a task wrought with danger and deception – before it’s too late.
Amazon

Q: What is the significance of quarters in Witches’ Quarters?

Witches’ Quarters has four main characters, who are all siblings. The Quarters are the avenue they use to enter the world of Nova. The oldest child, Charlotte, gives her youngest sister, June, the bag of quarters and coin bank to help distract her from their parents’ arguing.

Q: What quarters did you use in the book, and why did you choose those particular quarters?

I started by gathering all the quarters I had and examining their backs. The first time I did this, I was sitting on the bathroom floor with coins dumped out all around me. My husband walked in, found me there, cocked his head to the side and said “what are you doing?” I said “just wait,” and he let it go. I guess he didn’t press me on it because I do weird things sometimes and he has decided it’s best not to ask too many questions. Eventually, I let him read the first draft of the book and he understood.

Mostly I chose the quarters that had animals on them and made the animals characters in the book. The Oklahoma quarter has a scissortail flycatcher on it, which becomes a very important character in the book. Nevada has three horses that become primary characters as well.  I used Nevada, Oklahoma, North Dakota, Arizona, Arkansas, Kentucky, and Iowa.

The Iowa Quarter doesn’t have any animals on it, but I live in Iowa and love Iowa so I wanted to use it in the book.

Q: What happens when the characters in Witches’ Quarters use the traditional American quarter with the eagle on the back?

The answer to this question would be a huge spoiler, so I’ll just say that it’s a part of the book and something the reader has to find out.

Q: Sans spoilers, what are the central conflicts in Witches’ Quarters?

The first conflict readers encounter is familial conflict. The parents of the four primary characters, Charlotte, Ava, Nolan, and June, do not get along. There is some domestic violence, and neither the reader or the children know how the situation will pay out for the mother (at least until the end).

The second conflict is familial as well. The two oldest children, Charlotte and Ava, are constantly disagreeing with one another. These two are the closest in age, 16 and 15 respectively, and they both have very different ideas of what is best for their family. This leads to some decisions that get both Charlotte and Ava into some trouble.

The third conflict involves the entire world of Nova. There are two separate groups with separate cultures. Intelligent, talking animals are native to Nova. Witches from America are the second group. The groups each have different types of powers, but the power is transferrable. I won’t go into too much detail into this because it would have to include spoilers, but I’ll say that greed fuels the conflict between native Novians and the witches.

Q: Is there an inherent good or bad side to any of conflicts in the story?

Yes and no. Some conflicts have a clear right and wrong, while others do not. For example, domestic violence is always wrong. So, obviously the children’s father is wrong when he physically abuses his wife. But the conflict between Ava and Charlotte is less clear. Same with the conflict between the characters living in Nova.

For the most part, readers have to decide who is good and who is bad. Each group/character has good and bad traits. They all have reasons and justifications for their actions. Each reader may come to a different conclusion as to who is right and who is wrong, depending on what values that particular reader finds are most important.

Q: Relationships between characters is an important part books. What relationship did you enjoy the most?

I would have to say Ava and Paloma. Paloma is one of the three horses the siblings encounter in Nevada. She is a war horse and an important part of the animal’s resistance to the witch. Ava is a witch, although she doesn’t know it at the beginning of the book.

Eventually, they get to know one another and set aside their cultural differences. They decide to look at one another as individuals rather than as a group. The friendship that blossoms between the two characters at that point is unshakable.

I did. I wanted to challenge the issue of good vs. bad. Our world is so polarized these days and everyone seems to think they are firmly on the side of “good.” But what does that mean?

I practice as a criminal defense attorney as my “day job,” and I’ve spent a large part of my career addressing the “good” vs. “bad” question. People seem to think that prosecutors are good and defense attorneys, along with their clients, are bad.

The truth is much more complicated than that. Yes, a prosecutor seems good when she tries a case and ultimately convicts a burglar who broke into a house and beat the homeowner to death. Those facts always elicit strong emotions in everyone, and naturally people want to hold someone accountable.

But what if the person who was convicted was actually innocent? What if law enforcement missed some key pieces of evidence and arrested the wrong person? Who is the victim in that scenario? Who is good and who is bad? It’s a lot more complicated than initially thought.

I say the latter part because these two groups won’t likely believe the wrongfully convicted person was wrongfully convicted. To come to this conclusion, law enforcement would have to admit that they are the villains in the story. The family would have to admit that a killer is still out there and they rooted for the destruction of an innocent person’s life. Both of these things are contradictory to human nature. Both of these things are extremely unlikely.

Q: June is the youngest character in the book and she is epileptic. Why did you choose to give June this disease when you wrote her character?

I have a family member who has suffered with Epilepsy since she was a baby. It is a disease that not many people know much about. Actually, since it is a disease of the brain, doctors still don’t know a lot about it.

I decided to give June epilepsy for a couple of reasons. First, because I’ve never read a book that had an epileptic character and I wanted to draw some attention to the disease. Second, the disease created additional conflict in the story. I won’t go into detail because it would have to include spoilers, but it is important to the conflict between Ava and Charlotte.

Q: Will there be a sequel to Witches’ Quarters?

I didn’t write Witches’ Quarters with a specific intention either way. I was careful to make sure the book could stand alone without a sequel. But I also allowed room for the possibility.

A number of people who have read the book have encouraged me to make Witches’ Quarters a series. I don’t have specific plans to continue it at this point. I’d like to work on something entirely different for a little while. But if I do write another book in the series, I think it will likely be a prequel, not a sequel.

Q: What are you working on next? 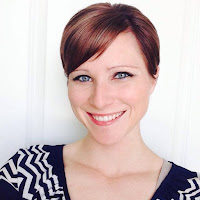 About the Author:
Laura M. Snider is a writer residing in Des Moines, Iowa. She grew up in Topeka, Kansas with seven siblings, one of which is her twin sister. Laura moved to Des Moines in 2006 to attend Law School and fell in love with the city. She still lives in Des Moines and is a managing partner in the law firm Johnson, Bonzer and Barnaby, PLC. Laura lives with her husband, three children, two dogs, and one very old cat.
While Laura’s career has been law, she has always loved books. And after finding so much joy in the writing of others, Laura decided to start writing novels of her own. It was this love of books coupled with Laura’s close-knit family that propelled her to finish her first novel. Laura wrote her debut novel, Witches Quarters,’ as a Christmas present for her niece, who shares Laura’s love of books.
https://laurasniderstories.com/
https://twitter.com/LauraSStories1
https://www.facebook.com/laura.barnaby.14 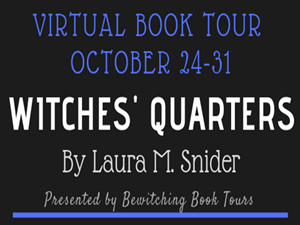