This week, find out more about the book ENCHANTER REDEEMED. 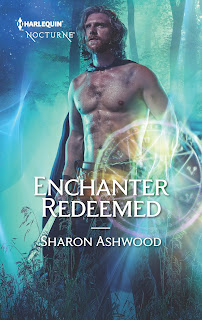 Enchanter Redeemed
Camelot Reborn
Book Four
Sharon Ashwood
Genre: Paranormal Romance
Publisher: Harlequin Nocturne
Date of Publication: February 1/6 2018
ISBN: 978-1335629487
ASIN: B073P5TL7J
Number of pages: 300
Word Count: 80,000
Cover Artist: Brandon Allen
Tagline:  Ancient magic and new passion…
Book Description:
In the last battle for Camelot, Merlin had to make a terrible choice. Now he must pay the price. When a demon from his past reappears, she wants nothing more than to destroy the wizard. Now to reap her vengeance as a lover scorned, the demon occupies the body of Clary—the apprentice who is capturing his heart—and has the innocent behaving in uncharacteristic ways. Ways that push the forbidden desire Clary and Merlin share into heated play…
Book Trailer: https://youtu.be/btP6qzxOmpk
Harlequin       Amazon       BN      Kobo       iBooks
Other Books in the Series
Book 1 – Enchanted Warrior (RITA nominee)
Book 2 – Enchanted Guardian
Book 3 – Royal Enchantment
Excerpt:

Clary jolted
awake. Power surged through her body, painful and suffocating. Her spine arched
into it—or maybe away from it, she wasn’t sure. Merlin had one hand on her side
and the other on her chest, using his magic like a defibrillator. The sensation
hammered her from the inside while every hair on her body stood straight up.
When he released her, she sagged in relief. A drifting sensation took over, as
if she were a feather in an updraft.
Merlin’s fingers
went to her neck, checking for a pulse. His hands were hot from working spells,
the touch firm yet gentle. In her weakened state, Clary shivered slightly,
wanting to bare her throat in surrender. She was a sucker for dark, broody
masculinity and he projected it like a beacon. All the same, Clary sucked in a
breath before he got any big ideas about mouth-to-mouth. If Merlin was going to
kiss her, she wanted wine and soft music, not blood and the dirty workshop
floor.
Another bolt of
power, more pain, another pulse check. Clary managed a moan, and she heard the
sharp intake of Merlin’s breath. His hand withdrew from her pulse point as she
forced her eyes open. He was staring down at her with his peculiar amber eyes,
dark brows furrowed in concern. She was used to him prickly, arrogant or
sarcastic, but not this. She’d never seen that oddly vulnerable expression
before—but it quickly fled as their gazes met.
“You’re alive.”
He said it like a fact, any softness gone.
“Yup.” Clary
pushed herself up on her elbows. She hurt all over. “What was that?”
“A demon.”
“I got that
much.” Clary held up her arm, peering through the rents in her jacket where the
demon’s claws had slashed. Merlin’s zap of power had stopped the bleeding, but
the deep scratches were red, puffy and hurt like blazes.
“Demon claws are
toxic.”
“Got that, too.”
“I can put a
salve on the wound, but you’d be smart to have Tamsin look at it,” Merlin said.
“Your sister is a better healer than I am.”
“She’s better
than anybody.” Clary said it with the automatic loyalty of a little sister, but
it was true. “She’s got a better bedside manner, too.”
Merlin raised a
brow, his natural arrogance back in place. “Just be glad you’re alive.”
She studied
Merlin, acutely aware of how much magic he’d used to shut the demon down. He
looked like a man in his early thirties, but there was no telling how old he
actually was. He was lean-faced with permanent stubble and dark hair that
curled at his collar. At first glance, he looked like a radical arts professor
or dot-com squillionaire contemplating his next disruptive innovation. It took a
second look to notice the muscular physique hidden by the comfortable clothes.
Merlin had a way of sliding under most radars, but Clary never underestimated
the power he could pluck out of thin air. She was witch born, a member of the
Shadowring Coven, but he was light years beyond their strongest warlocks.
That strength
was like catnip to her—although she’d never, ever admit that out loud. “What
were you doing?” she demanded, struggling the rest of the way to a sitting
position.
“I was watching
the demons through a scrying portal when you interrupted me.” His tone was
precise and growing colder with every syllable. Now that the crisis was over,
he was getting angry.
“The she-demon
tried to kill me.” Clary’s insides hollowed as the words sank home. Dear goddess,
she did kill me! And Merlin had brought her back before a second had passed—but
it had happened. Her witch’s senses had felt it happen. The realization left
her light-headed.
“She doesn’t get
to have you,” he said in a low voice.
Their gazes
locked, and something twisted in Clary’s chest. She’d been hurt on Merlin’s
watch, and he was furious. No, what she saw in his eyes was more than icy
anger. It was a heated, primal possessiveness that came from a far different
Merlin than she knew. Clary’s breath stopped. Surely she was misreading the
situation. Death and zapping had scrambled her thoughts.
“I shouldn’t
have walked in on you.”
“No, you
shouldn’t have,” he said in a voice filled with the same mix of ice and fire.
“You’d be a better student of magic if you paid attention. You asked me to
teach you proper magic and not the baby food the covens use. Real magic is
deadly.”
Abruptly, he
stood and crossed the room to kick a shard of agate against the wall. It
bounced with a savage clatter. Clary got to her feet, her knees wobbling. He
spun and stormed back to her in one motion, moving so fast she barely knew what
was happening.
He took her by
the shoulders, the grip rough. “Don’t ever do that again!”
And then his
mouth crushed hers in a hard, angry kiss. Clary gasped in surprise, but there
was no air, only him, and only his need. She rose slowly onto her toes, the
gesture both surrender and a desire to hold her own. She’d been kissed many
times before, but never consumed this way. His lips were greedy and hot with
that same confusing array of emotions she’d seen a moment ago. Anger. Fear.
Possession. Protectiveness.
Volatile. That
was the word she’d so often used in her own head when thinking about him.
Volatile, though he kept himself on a very short chain. Right now that chain
had slipped.

When I was around seven or eight years old, I read a series of books I didn’t want to end so I started making up my own stories. I guess that’s a very, very early version of fanfic! Anyhow, that got me started and by the time I got out of high school I’d started writing novels. It wasn’t until much later that I began to seriously think about publishing, but I’ve always been engaged in telling stories.

I wrote freelance articles for a couple of arts magazines—which, incidentally, is a terrific apprenticeship for being an author. I did a feature article on a local Romance Writers of America conference, which introduced me to the group. I started attending the chapter meetings and realized that there were established avenues to publication which weren’t easy but were possible. That instant, I buckled down and got to work. This was long before independent publishing, and I got my first contract through a chapter contest.

Clearly, I want to tell a story that will keep readers turning the pages!  I have lots of action, adventure, and the thrills and spills of romance in my books. But I also want to give readers a story of self-acceptance and the strength that comes from that.  I write about misfits who find themselves and their chosen family and thrive.

Readers, hands down. There’s nothing more satisfying than hearing that I’ve given someone a few hours of enjoyable escape.

I write with my whole heart and it can be exhausting! I go on the journey with the characters. By the end of a good writing session I feel like I’ve been through the wringer. It makes for a better book and I will always dig deep, but there are times when I need to take a break for a few days.

My website is here—with all my books, newsletter, and blog. 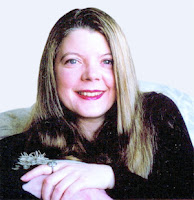 About the Author:
Sharon Ashwood is a free-lance journalist, novelist, desk jockey and enthusiast for the weird and spooky. She has an English literature degree but works as a finance geek. Interests include growing her to-be-read pile and playing with the toy graveyard on her desk. As a vegetarian, she freely admits the whole vampire/werewolf lifestyle fantasy would never work out, so she writes paranormal romances instead.
Sharon lives in the Pacific Northwest and is owned by the Demon Lord of Kitty Badness.
Website http://www.rowanartistry.com/authors/sharon-ashwood/
Twitter https://twitter.com/RowanAshArt
Instagram https://www.instagram.com/rowanashart/
Pinterest https://www.pinterest.com/rowanashart/
Facebook https://www.facebook.com/authorsharonashwood/
Goodreads https://www.goodreads.com/author/show/1880316.Sharon_Ashwood
Newsletter http://www.rowanartistry.com/authors/sharon-ashwood/ 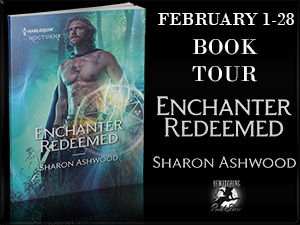