This week, find out more about the book MISTRESS SUFFRAGETTE .

I have been writing since I was six years old. It started with poetry, then morphed to diary entries. After that, I started writing restaurant reviews for my school paper. Later, I wrote features for the school paper, followed by my first novella.  I knew I wanted to write, and my mission was to find the right form.

Mostly I love reading the classics, such as novels by Edith Wharton, Jane Austen, and Charlotte Bronte. I have probably read The Great Gatsby five times to study how F. Scott Fitzgerald handles voice and point of view.

I believe that writing is a process, and that if you treat the process seriously eventually your work will be published. I take two writing classes a week in Manhattan where I live.  In one class, I am allowed to submit twenty pages every few weeks; and in the other class, I am allowed to submit 10 pages every few weeks. In each class, fifteen readers, my fellow classmates, read and comment on each other’s pages. The deadlines and all the feedback help keep me writing and revising so that I am conveying the intended message.

I love to be woken up by one of my characters. It’s a great feeling to dream about my story, then wake up in the middle of the night saying, “no, this is how the story needs to work.” When that happens, I bound out of bed and run to my computer to capture it all.

It’s a serious commitment. I write seven days a week. Sometimes it’s a challenge to sit down and write pages, but I also believe that it’s essential to write every single day.

There are two schools of thought on this, so I am going to express both. One school says, “write your way through it. Just keep writing and the block will disappear.” The other school says, “take a break and give yourself permission to relax.” One thing that works for me is to write something else. In other words, if I feel blocked writing my novel, sometimes I say, “today’s the day I am going to write an article about writing.” Or maybe I’ll write some flash fiction or creative nonfiction that day.

Write something every day. Start with small, achievable goals. For example, tell yourself that you will write for one hour a day. Over time, you will amass a significant body of work. Also, I would say: try not to fret about what other people think about your career choice. Many will tell you that you can’t do it. Cut those folks out of your circle if you can. You want to surround yourself with people who believe in you and who will cheer you on. Last, never stop submitting your work. Today maybe you haven’t been published yet. Tomorrow, you’re winning a gold award.

I believe that the search for love and the search for independence do not have to be mutually exclusive. My heroine struggles with both searches, and I believe this is the human experience. Also, my novel Mistress Suffragette, takes place during the late nineteenth century when choices for women were more limited.

I am happy to say that I am working on the sequel to Mistress Suffragette now. I am hoping it will be a trilogy.

Find out more about… 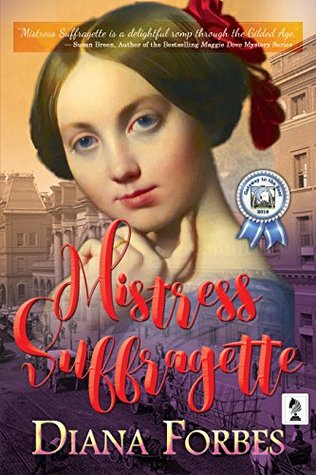 A young woman without prospects at a ball in Gilded Age Newport,
Rhode nIsland is a target for a certain kind of “suitor.” At the
Memorial Day Ball during the Panic of 1893, impoverished but feisty
Penelope Stanton quickly draws the unwanted advances of a villainous
millionaire banker who preys on distressed women—the incorrigible Mr.
Daggers. Better known as the philandering husband of the stunning
socialite, Evelyn Daggers, Edgar stalks Penelope.Skilled in the art of flirtation, Edgar is not without his charms,
and Penelope is attracted to him against her better judgment. Meanwhile a
special talent of Penelope’s makes her the ideal candidate for a paying
job in the Suffrage Movement.In a Movement whose leaders are supposed to lead spotless lives,
Penelope’s torrid affair with Mr. Daggers is a distraction and early
suffragist Amy Adams Buchanan Van Buren, herself the victim of a
faithless spouse, urges Penelope to put an end to it. But can she?Searching for sanctuary in three cities, Penelope will need to
discover her hidden reserves of courage and tenacity. During a
glittering age where a woman’s reputation is her most valuable
possession, Penelope must decide whether to compromise her principles
for love. 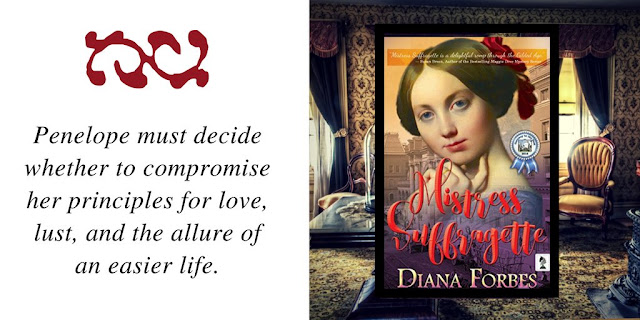 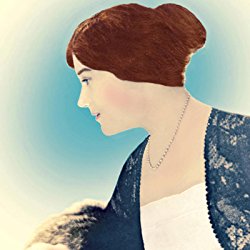 Diana Forbes is a 9th generation American, with ancestors on both
sides of the Civil War. Diana Forbes lives and writes in Manhattan. When
she is not cribbing chapters, Diana Forbes loves to explore the
buildings where her 19th Century American ancestors lived, loved,
survived and thrived. Prior to publication, Diana Forbes’s debut won 1st
place in the Missouri Romance Writers of America (RWA) Gateway to the
Best Contest for Women’s Fiction. A selection from the novel was a finalist in the Wisconsin RWA “Fab Five” Contest for Women’s Fiction. Mistress Suffragette
won 1st place in the Chanticleer Chatelaine Award’s Romance and Sensual
category, and was shortlisted for the Somerset Award in Literary
Fiction. Mistress Suffragette won Silver in the North American Book Awards and was a Winner of the Book Excellence Awards for Romance. Mistress Suffragette
was also a Kirkus Best Indies Book of 2017. The author is passionate
about vintage clothing, antique furniture, ancestry, and vows to master
the quadrille in her lifetime. Diana Forbes is the author of New York
Gilded Age historical fiction.