Today, find out more about NOT FOR ME.

DISCLAIMER: This content has been provided to SHANNON MUIR’S INFINITE HOUSE OF BOOKS by YA Bound Book Tours. No compensation was received. This information required by the Federal Trade Commission. 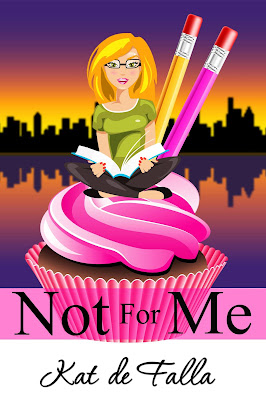 Not for Me
by Kat de Falla
Genre: NA Contemporary Fiction
Release Date: May 2018

Manda Wolfgram is a struggling literary agent who is looking for the perfect manuscript to land in her lap and the perfect man to land in her bed. When the sixth-floor hottie finally asks her out, she get more than she bargained for. How can a girl wrap her brain around a Shakespearean actor who writes erotica?

Harry Sackes leads a double life: making a career as an author by day and dipping into the dark underworld of criminals at night. The moment he sees Manda in his twin brother’s arms, his whole life becomes his personal Shakespearean trag-comedy of mistaken identity and unrequited love in this fast-
paced chick lit romance.

Purchase links:
Amazon: https://www.amazon.com/dp/B07CK84YZ5
Barnes & Noble: https://www.barnesandnoble.com/w/not-for-me-kat-de-falla/1128533434
Kobo: https://www.kobo.com/us/en/ebook/not-for-me-the-windy-city-chronicles-book-1
iTunes: https://itunes.apple.com/us/book/not-for-me-the-windy-city-chronicles-book-1/id1375707331
IndieBound: https://www.indiebound.org/book/9781717180360
Excerpt:
Women should meet men at balls, not bars.
The doors opened, jolting me from my British Renaissance daydream enough to step inside the claustrophobia-inducing metal box. The doors started to close when a series of rapid clicks and heavy footsteps pounded toward the elevator. A deep voice yelled, “Hi ya, George! Hey, can you hold the elevator?”
I knew that voice. Oh no!
With a jerk forward, I managed to hit the little button with two outward pointing arrows. A hand appeared in between the doors to stop them from shutting. The doors reopened. My throat seized shut, and time froze.
The sixth-floor hottie!
Every time we passed, I couldn’t form a coherent sentence. My brain cells deserted me when his male perfection entered my personal space. The last time we passed in the lobby, it was summer and Beefer sniffed his golden’s butt to my utter mortification. I think I mumbled “I’m sorry” and fled in horror.
Today I will form words!
Emboldened, I stood taller and began to formulate a witty question. My cheeks burned while I resisted the urge to gawk. He was bundled up in a winter coat and heavy boots, holding a bag of groceries and wearing an ushanka winter hat that covered most of his face. But it was him. I knew for sure because of the dog.
Instructing myself to take deep breaths, I vowed I’d say something funny and interesting. I was a literary agent for crying out loud! I lived in a world of words. But then I caught a whiff of him: masculine and heavy, like black pepper and tangerines with a splash of the fresh cool, Lake Michigan wind. After that, all words eluded me. Blank. I had nothing.
“Thanks for holding the door.” He spoke. To me. And in the most polite manner, his hint of a smile melting my insides like hot chocolate after a winter snowball fight.
The elevator slid shut. I stole a sideways glance, and his gray-green eyes locked on mine for a fraction of a second too long.
I jerked my head toward the front of the elevator again, swallowing copious amounts of saliva. Great, I’m about to drool over this guy for real!
He reached across and hit the buttons for the sixth and eighth floors. He raised one eyebrow. “Eight, right?”
I nodded like an idiot from my stupor, wishing I could channel chameleon superpowers and melt into the wall.
Hold up! He knows what floor I live on?
Trying to focus on something else, I watched his waggy-tailed golden retriever, who had pranced into the confined space and planted its furry backside right next to its owner.
He pulled a flask from his jacket and unscrewed the cap. After taking a swig, he held the bottle out to me.
I couldn’t do anything but give him a confused expression. The elevator stopped at four, but the hall was empty. I risked a look inside his paper bag. A stalk of celery was sticking out next to a nudie magazine. My precious sixth-floor hottie was hot all right…a hot mess.
“So no?” He calmly covered his flask and put it away. “Oh, Desdemona, if only she knew ‘I have very poor and unhappy brains for drinking.’” He mumbled the whole thing while patting his dog on the head.
Who the heck was this guy? Quietly quoting Shakespeare but drinking from a flask in an elevator with a girlie magazine in his grocery bag? I mean, where was the guy I saw this summer out for a run? The guy whose T-shirt was sticking to him in all the right places? The guy with the defined shoulders and rippled abs that made me want to ski up and down their slopes?
“What’s your name, big guy?”
Beefer puffed out his chest to be macho and sat up nice and tall while the sixth-floor hottie scratched his chin.
“His name is Beefer,” I answered, realizing how uncool his name was compared to Othello’s Venetian debutante. “Desdemona?” I said it out loud because I still couldn’t believe it.
“Nobody gets the reference. No worries.”
The elevator opened on the sixth floor, and he stepped out.
“Shakespeare’s Othello,” I said without a moment’s hesitation. “I’m…I’m a literary agent.”
He turned quickly and stuck his hand in the other pocket of his coat. His eyes brightened, and one corner of his mouth lifted in a half smile as the door began to close. He stuck his arm inside, risking bodily injury, and the door shut on his outstretched hand.
He dropped something.
The door opened all the way back up as a safety precaution, and I bent down to pick up the piece of paper. Now it was my turn to force the elevator into an indecisive pattern. I stuck my head out into the hallway and followed the direction of Desdemona’s wagging tail. “Hey, you dropped this.”
“It’s for you. If you really like Shakespeare, come see me,” he stopped walking and looked over his shoulder.
I looked down to find a ticket for Romeo and Juliet at Navy Pier for today!

About the AuthorKat was born and raised in Milwaukee, Wisconsin where she learned to roller skate, ride a banana seat bike, and love Shakespeare. She holds a Doctor of Pharmacy degree and is happily employed as a retail pharmacist. She is married to her soul mate, composer Lee de Falla and raising four kids together ala the Brady Bunch. The Seer’s Lover was Kat’s first book and she is working feverishly on four different series at the moment!
Author Links: