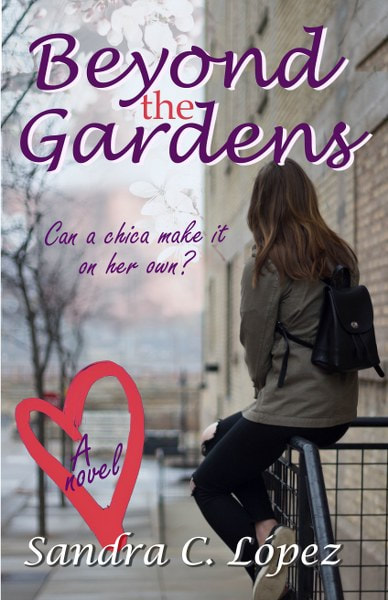 Beyond the Gardens
by Sandra C. Lopez
Genre: Teen Fiction

At the age of 18, Esperanza Ignacio begins her college years at an upscale Los Angeles art school, where she studies to fulfill her long-term dream in Animation. But she soon learns the truth to the old folktale: “you can take the girl out of the barrio, but you can’t take the barrio out of the girl.” Even though she’s getting financial aid, Esperanza works a part-time job during her break from classes just to make ends meet. Her roommate, Anna, is what she calls a “chicana from Beverly Hills” because of the rich daddy and the new car she got for her quinceañera.
Things get a little confusing for Esperanza when an old friend comes looking for her, hoping to start a meaningful relationship. But is Carlos the right guy for her? She never even considered him to be anything more than a friend since high school. Then comes Jake, a gorgeous mechanic, who shares her passion for books and loves her for who she is. What’s a girl to do?
Strength and determination help pave the way for the future. And, as she approaches her graduation, she is faced with a difficult decision: should she leave Los Angeles and leave behind her family, her home, and everything she’s known? Ever since she was born in the California barrio of Hawaiian Gardens, she’s always had to look over the fence, wondering what she’s been missing. Now she’s taking a flying leap over to see what’s beyond the little barrio. What’s beyond her family, her friends, and her past? What’s beyond the little nothing town, where dreams don’t exist? What’s beyond The Gardens? Is it life, love, a future? The story of Esperanza is finally concluded in this wildly entertaining and heart-warming sequel.
**Only .99 cents!!**
Goodreads * Amazon
**Don’t miss Book 1 – Esperanza!** 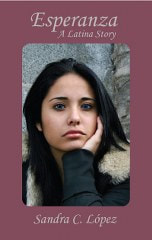 Sandra C. López is one of today’s influential Latina authors in Young Adult literature. Her first novel, Esperanza: A Latina Story, was published in March 2008 WHILE she was still in college. Since then she has published several other books, including the Single Chicas series. She was named as one of “2011 Top Ten New Latino Authors to Watch” by Latino Stories, and her book, Beyond the Gardens, was a Silver Medal winner of the 2016 Global Ebook Awards in Multicultural Fiction and won first place in the Int’l Latino Book Awards. She also works as a freelance illustrator and graphic designer. Art, literature, and travel are her passions, and she aims to keep doing them as long as she can. For inquiries regarding events and projects, please contact her directly.
Website * Blog * Facebook * Twitter * Amazon * Goodreads