Today, we look at ISLE OF SAVAGES. 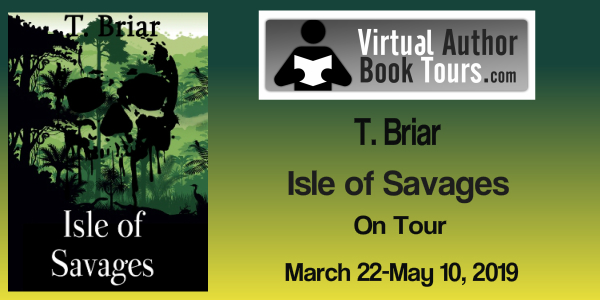 DISCLAIMER: This content has been provided to SHANNON MUIR’S INFINITE HOUSE OF BOOKS by  Virtual Author Book Tours. None of it reflects opinions of Shannon Muir. No compensation was received. This information required by the Federal Trade Commission. 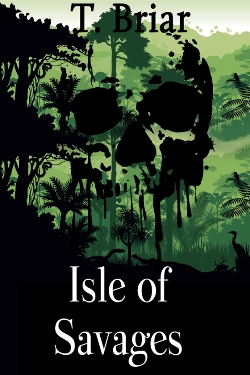 Isle of Savages by T. Briar

Description of Isle of Savages by T. Briar

Eleven souls are shipwrecked on an island teeming with sub-human cannibals. Who will survive to tell the tale?

On July 20, 20— a charter school’s sponsored sail from San Diego to Hawaii hits a reef during a violent storm. Sixteen souls abandon ship. Nine students, along with the hated captain and first mate, wash up on what they believe is a deserted island.

Separated into three groups by circumstance and mutual distrust, treachery and death lurk for all. Over the course of a single day, one student betrays all the others. Another drowns. Two others get ambushed by a great white shark. And, like falling dominoes, the captain, first mate, and six students fall prey to a tribe of bloodthirsty cannibals.

In the face of almost certain death, who will escape the isle of savages to tell the tale?

Praise for Isle of Savages by T. Briar

“Freaking Amazing! This books was such a wild ride from page one. So many twists and turns that you just can’t figure out what the hell is going to happen next! It was so hard to put down and very, very well written.  I am very picky with the books I read, I know I say that a lot, but it’s true. This book met every single one of my expectations and then some.

With the characters, you either really felt for them, or you held seething hatred for them. It was like the main characters couldn’t seem to catch a break and the villains of the story kept getting a leg up. It was driving me crazy! I was found yelling at my kindle, cursing, clenching my fists, all because this story was so easy to get into! In fact, it was hard NOT to!

This is not a happy story, by any means. There is so much death and destruction and it’s written in great detail. So if you get wigged out easily, this might not be the book for you. Me, I love this kind of stuff. The blood, the gore, the chaos, this book had it all! Definitely 5 out of 5 stars for me!”- Amanda, Rabid Readers Book Blog

Briar spent his formative years in the treacherous worlds of The Savage Sword of Conan, The Warlord, and Jonah Hex comics. So he’s been fascinated with action adventure stories for most of his life. From there, he eventually discovered Jack London, Louis L’amour and Jack Higgins. These days he’s devouring thriller novels by James Rollins, Clive Cussler and a host of other adventure writers.

This led him to start writing at an early age and he didn’t stop until he saw his name in print. Although, it wasn’t in the thriller genre. Not at first. But it was always a given that he’d eventually write and publish a thriller. It just took him a few extra years to get around to it.

He lives in South Georgia with his wonderful wife of 25 years.

Guest Review of the Book

“What happened to me?” Eric Kovac asks himself. He wakes up face down and almost naked in a receding wave wash on a deserted beach.

A lot can happen in a very short time. When a group of unassuming high school students sail from San Diego on a school sponsored education trip to Hawaii islands they are unaware that soon they will be fighting not only for their survival but for their very life.

That’s how Eric finds himself disoriented, battered and weakened on a beach of a deserted island. It all starts coming together.  He recollects that their yacht running from a terrible storm had hit something and the captain ordered everyone to abandon ship. Eric must find and save his best friends Mia and Kari who like him were the only sponsorship cases in the rich kids’ only trip.

Eric finds Mia and Kari alone nearby on a skiff. He realizes they are alone without knowledge of whether anyone else survived and their only escape route, the sea, is cut off by a patrol of bloodthirsty sharks. They must survive the island and its jungle while hoping a rescue is coming.

The survivors are about to know that surviving the yacht wreck is just the beginning and the smallest of their problems. Things are about to get worse. Soon the survivors will be fighting mistrust and treachery among themselves for their own to escape from captivity of the eerie human like cannibals inhabitants of the island with dinner in mind.

Can the group self-serving survivors’ work together to survive? Will they escape captivity and murder by the cannibals? Will rescue come? Is there anyone who will survive? Who has more will to live?

I loved the intensity of this engaging horror novel. Page by page the writer graphically portray the survivors’ horrors while exposing their hidden characters. By separating the survivors into groups and pitying them against each other, the writer puts you right in the middle of the survivors’ battles for survival. Once you start reading this book I promise you will not be able to put down.  5 out of 5 stars!

About a quarter of the way back to the yacht, Mia noticed that Keri kept casting sly glances at her and Eric from where she walked next to the surf only a few feet away.

Mia knew there was no telling what devilment her friend was cooking up. But she knew it was something funny for sure. Before the cruise, Keri had loved making jokes at the most inappropriate times. And the more inappropriate the subject matter, the more hilarious her friend thought the jokes.

On a positive note, since getting away from the captain and Gregory—despite their present situation—Mia thought this was a sign that her best friend was turning back into the Keri she’d grown up with. Fun, happy, carefree Keri; the one girl in the world who believed, no matter what, that everything was always going to eventually turn out all right.

Like a jolt of lightening hitting Mia in the back of the head, the perfect way to soften Eric up presented itself. All she needed to do was use humor to her advantage against him, provided Keri could get them all laughing and feeling lighthearted again. So when Keri glanced over next, Mia raised eyebrows, saying, “Why don’t you go ahead and say it, Keri, whatever’s on your mind. Even though I’m sure I’ll regret asking.”

“In that case, I’d better not say it.” Keri struggled to maintain a semblance of crestfallen seriousness.

“Go ahead,” Eric prompted, falling for the bait as Mia knew he would. “I can tell from the look on your face that it’s killing you not to say it. Eventually, you’re going to say it anyway. I, personally, can’t wait to hear what brilliance you’re going to bestow upon us. Cause you know how brilliant you really are.”

“Since you’re begging to hear it, Eric,”—Keri flashed pearly whites—”I was just wondering if Mia needs any help toting you.”

“FYI…I don’t need anyone to tote me. I can walk just fine. I’m only humoring Mia,” Eric stated, sending over an arrogant smile.

“I bet you don’t, Eric. You look like you’re about to topple over to me.” Keri sent back a challenging grin.

“We’re not halfway yet. I’ll let you know when we get there.” Mia met Keri’s grin with a mocking glance. Then, when the exact right amount of silence passed, looked directly at Keri again. “You know what? I was expecting something funny to come out of your mouth. You must be losing your touch.”

“How dare you say that!” Keri chided, shooting back a sly grin. “I’m getting to it. Just give me a second… Okay, so here goes… I was just hoping that you’d let me help you tote Eric because the both of you look so cozy together that I’m starting to feel a little jealous. But that also makes me think of the future with bubbling happiness.”

“Still not funny,” Mia and Eric said at the same time. She glanced up at him, remembering something from childhood that fit perfectly. “Jinx on you.”

“I’m already jinxed.” He hung his head in feigned distress. “I’m stuck on this island with you two girls, remember?”

Mia smiled up at him. This couldn’t be going better if she was a puppet-master. Now all she needed was…

“Hmmph. I’m going to give you a sandwich.” He lifted a balled fist and shook it at Keri. “And it’s got five knuckles in it. So you might want to keep your distance.”

“Now that’s really funny.” Mia giggled to provoke Keri into bringing on her A-game. She really needed her friend to step it up now.

Keri put on a pout. “Sorry for trying to lighten things up for the both of you, especially for you, Eric. Because you know what? If we weren’t getting rescued in a few days, then you’d have to eventually marry both of us. You’d have to build us a hut, make us seashell necklaces for our anniversaries—you know, always put us first and take really good care of us. And when we got mad at you for serving us fish for the thousandth time, you’d have to—”

“Who said I was going to serve you?” Eric appeared taken aback. “You’ll be serving me because that’s how it works in primitive societies. The man always comes first. Didn’t you pay attention in history class?”

Before Mia could giggle at Keri’s expense to provoke her friend to even greater extravagance, Keri turned toward the horizon and lifted hands up in mock supplication. “Oh, come on rescue plane! Don’t leave me on this island with this Neanderthal. I deserve so much better.”

Mia immediately joined in, so very happy that Keri was back and better than ever.

In-spite-of everything that had happened to them and whatever might lie ahead in the next few days, during this brief moment of levity, Mia could not have expressed in words how grateful she was that the three of them still had each other. And when she glanced up at the sky, there weren’t any clouds on the horizon, no ill-omens, nothing but blue sky for as far as she could see.

Yeah, and even better, she was fixing to get her way. In just a minute or two. She could already feel it.

Giveaway for Isle of Savages by T. Briar

This giveaway is for 3 winners choice of one print or ebook copy of the book. Print is open to the U.S. only and ebook is available worldwide. This giveaway ends May 10, 2019, midnight pacific time. Entries are accepted via Rafflecopter onlly.

One Reply to “BLOG TOUR – Isle of Savages”