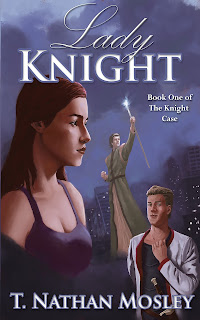 The Knight Case
Book One
T. Nathan Mosley
Genre: Fantasy/Urban Fantasy
Date of Publication: January 27th, 2017
ISBN: 9781520470863
ASIN: B01N26OWAV
Number of pages: 229
Word Count: 84,819
Cover Artist: Ruben G. Ramos
Book Description:
Detective Cameron Knight does not believe in magic. It’s kind of hard to when you’re a single(-ish) mother in a high stress job that pulls you from bed at all hours of the night. One of these nights, though, Cameron encounters a magician. Not one of those guys who pulls rabbits out of hats, but a real, true magician. Of course she doesn’t believe it. Until Mathias reveals to her a world that is full of magic, Knights, kings, and more.
Following the writings of one of the most powerful magicians to have ever lived, Mathias escaped to Earth, running from Knight Captain Emil Rouland. Emil has been tasked with bringing Mathias before the King of Draeca to face the King’s justice.
But Marek, a magician and enemy of Mathias, has other ideas. He sees this as his big break to finally exact his revenge on Mathias and become the hero he’s always wanted to be. Little do they all know, however, the cost of traveling between Earth and Draeca has a terrible cost.
The fate of both worlds will hang in the balance as Vee, a being of immense power and evil, plots to conquer one, or both, of the worlds.
Amazon     Amazon Paperback
Interview with the Author:

I first had an interest in writing when I read Cat’s Cradle by Kurt Vonnegut. The characters and world he created fascinated me, and ever since I’ve been writing and creating my own worlds and characters.

Moving into being published just kind-of happened one day. I had finished Lady Knight, realized it was done, then realized what that meant. Even my parents were surprised when I first announced that my book was available. It wasn’t so much a decision as realizing it was the next step that I needed to take.

I write to entertain. Readers should have a good time reading my works, and they should come away feeling satisfied that the story they just read was uplifting and enjoyable. I believe strongly that every book should have someone to root for.

The act of writing itself is rewarding. Being able to look back and say, “I did that. Wow. That was me.” Is an extremely satisfying feeling.

I always struggle with the middle parts of every story. Bridging the gap between Act 1 and Act 3 in a story is extremely difficult, as Act 1 and Act 3 are where all the interesting things happen. Finding a way to bring those two together in Act 2 is a huge challenge for me.

Do your homework! I know a lot of people might say “don’t give up” or “just keep writing”, but that doesn’t always work. Understanding every step of the process from going to an outline to hitting the “publish” button is vital. I missed several of the steps when I first started, so it’s not all bad if you don’t understand everything 100%, but once you realize you’ve missed a step, it’s crucial that you complete it when you can.

Additionally, there are several things you can get started even if you haven’t finished writing your story. Find a cover artist, find potential publishing venues, have a compendium of literary agents you can contact, find an editor and beta readers, research book tours and promotional materials. Having a finished story ready for publishing isn’t the end of the tale. Once your story is finished, it becomes a living thing with tons of moving parts. Having them all work together is key to success.

Any way you can think of, I probably have it. Facebook, Goodreads, Twitter, and I have a blog which I try my best to update weekly. I can also be reached directly via e-mail at contact@tnmosleybooks.com, if you like good old fashioned e-mail.

Excerpt:
“We found
someone – a man. He’s… not quite right, and he’s got this weird costume on.
Said he knew about the explosion. Thought you’d want to try talking to
him.” The kid said. Cameron exchanged a look with Kim and pulled the
cigarette from her mouth, sighing. It would have to wait.
“Alright,
where is he?” Kim said.
“Over
talking to the paramedics, they’re saying it’s dementia, uh, maybe caused by
shock or something. I’m not a doctor.”
“That’s
what we pay them the big bucks for. Good work, uh…” Cameron inspected
the officer’s name badge, “Officer Winsley. Off you go.” Cameron
nodded to him and patted him on the shoulder as she blew past him, heading for
the ambulance. The ‘costume’ Winsley had reported was actually a set of long,
flowing green and gold robes that draped off the man. A heavy cloak was set
about the man’s shoulders, and he spoke calmly to one of the paramedics as they
asked him questions.
“My
eyesight is perfectly fine, madam. This is the third time you’ve put that
lightstick into my face – I kindly request that you cease immediately.”
The man said, and the paramedic looked to the detectives with a shrug.
“He checks
out. No signs of drug use that I can see, physically healthy, just…” The
paramedic made a spinning motion with her hand, one finger pointing at her
head. “He’s all yours.” She said.
The man stood as
the detectives approached, his head bowing to them so deeply it bent his
shoulders and torso towards them. “I know not who you are, but please
allow me to thank you for getting that… vulture, away from me. Poking and
prodding with her…” he waved a hand, “instruments.” The man
was strikingly handsome, and Cameron couldn’t help but notice how focused and
intense his blue eyes were as he regarding them. His black hair was slicked
back with some sort of gel, and it was cut close to his head – just long enough
to be styled and flare out slightly behind his ears and along the back of his
neck.
“That’s her
job.” Kim said as Cameron took the time to light her cigarette, puffing on
it as Kim continued, “She’s a paramedic. She wanted to make sure you were
okay.”
“Ah, a
healer! I beg pardon, I did not understand her ways, and this word…
‘paramedic’. It is foreign to me,” he said, a look of worry crossing his
face. “Please, assure her I am quite alright. Perfect in all of my
faculties,” he paused as Kim and Cameron shared another look, “Well,
except, I cannot seem to find my staff, but it will turn up sooner or later I
suppose.”
“Alright,
cut it out. Enough of the jokes,” Cameron said, and the man frowned at her
in confusion, “How about we start from the beginning. Who are you, what
are you doing here, and what do you know about the explosion?”
The man’s face
brightened some, and he swept into a low bow, leg forward and one hand on his
chest as the other swept out to one side. “I am Mathias, Lord of the House
of Relain, personal magician to His Majesty King Lerrad Olmsith of the Kingdom
of Draeca, and…” Mathias frowned, “Well, that is who I used to be.
I am now an outlaw by decree of King Lerrad, but I suppose that is not what you
are inquiring about. I brought myself here as I was fleeing from his soldiers –
you understand I am sure, it is difficult to corner a magician,” he
finished with a wink at Kim.
Cameron put a
hand on Kim’s arm as she took a long drag from her cigarette, stopping Kim from
decking the wacko. “Alright, let me get this straight. You’re, what, some
sort of wizard? And you want us to believe that you brought yourself here,
using…”
“Magic,
yes, of course. The signs are evident,” Mathias said, nodding towards the
warehouse. “My apologies about the, ah, building there. An unintended side
effect of my hastily constructed spell. I believe in my haste I may have made a
mistake in the incantation. It would also explain the disappearance of my
staff…” He said, his tone turning thoughtful as he spoke.
“Can you
give us a moment?” Cameron asked.
“But of
course,” Mathias said, bowing his head towards them again.
The detectives
stepped away from the man and Cameron dropped her cigarette, smashing it into
the pavement with her shoe. “Okay. What the hell.” She said.
“He’s
clearly lost his mind. The explosion knocked him into something and he
snapped,” Kim said.
“He didn’t
have a mark on him, Kim. No dust, no ash, nothing,” Cameron pointed out.
“Well,
okay, but – wait, you’re not saying you actually believe him?”
“No, of
course not! Magic and spells and kings… Ridiculous, of course. Okay, how
about this: He sets a bomb, gets clear, and then the shock of what he’s done
makes him conjure some crazy fantasy.”
“What, like
repression or something?” Kim said, glancing back at Mathias – if that was
even his name. He was standing patiently, watching them with his hyper-focused
eyes and his hands clasped behind his back.
“Yeah.
Maybe it started before he even knew what he was doing. Got caught up in his
fantasy and doesn’t really know what’s going on.”
“Okay.
Works for me. How do we handle him?”
“Play
along, for now.” Cameron said, frowning towards Mathias. He returned her
frown with a wide, toothless grin. She looked back at Kim and sighed, pulling
another cigarette from her pocket. “It’s gonna be a long night.” 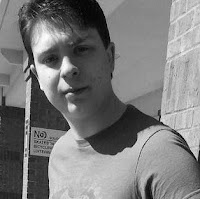 About the Author:
T. Nathan Mosley was born and raised in Woodstock, Georgia. He is an avid fantasy and science fiction fan and gamer. He lives in Roanoke, Virginia with his two cats and dog that he tries constantly to avoid spoiling too much. His primary genres include general fantasy and urban fantasy, though he has played with the idea of science fiction on occasion. He is currently studying to become a professor of mathematics.
Blog: http://blog.tnmosleybooks.com/
Twitter: https://twitter.com/tnmosleybooks 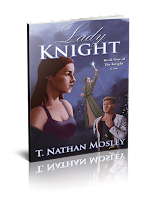 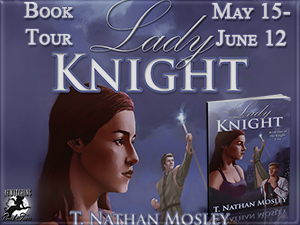