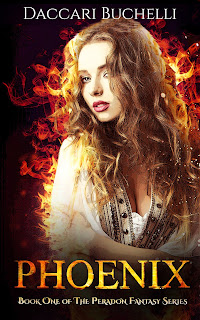 Phoenix
The Peradon Fantasy Series
Book One
Daccari Buchelli
Genre: Young Adult Fantasy
Publisher: Buchelli Books
Date of Publication: 30th April 2017
ISBN: 9780995768307 print
ISBN: 9780995768314 eBook
ASIN: B06XSL13FD
Number of pages: 396
Word Count: 100,980
Cover Artist: T.L. Mason
Tagline: ‘You’re only a prisoner if you believe you are.’
Book Description:
‘You’re only a prisoner if you believe you are.’
Magic. Sheltered from the cruelties of the world, Princess Violetta came to adore it. When a terrible tragedy befalls her realm, she vows to shun her royal duties, setting off a chain of events that will see her true power come to light.
Prince Ryore spent his life at the mercy of his father and was deemed the weak link in the chain of command. His new found status as Emperor sees the entire Frost realm bow to him. Little does he know that enemies lurk within his walls, determined to end his reign before it begins.
Book Trailer: https://youtu.be/Gh3dyddZCDw
Amazon     Amazon UK    Smashwords
Interview with the Author:

As soon as I learned to read, I couldn’t stop my imagination from wandering and creating its own stories. At aged eight, I began to write them down, sticking to Fantasy as I preferred to give life to the worlds and characters that my mind created. I never stopped loving books or the Fantasy genre.
How did you decide to make the move into being a published author?

I knew that I wanted to take this passion I had for writing and turn it into something that I could share with others. I had a concept for a book that I believed was exciting and so I did my research and began crafting my novel, while learning about the publishing industry.
What do you want readers to take away from reading your works?

I would love it if my work could inspire someone to make a positive change in their life, no matter how great or small. If readers are able to identify with the problems of the main characters, even if indirectly, then perhaps they can find solutions through the way the characters resolve their own conflicts.
What do you find most rewarding about writing?

I think the moment that someone connects with you and tells you how much they enjoyed your work is the most rewarding experience because if not for readers, then books wouldn’t serve their primary function. It is readers that enable books to become a success and so each is like a precious jewel. I appreciate every reader that I will ever have because they will be with me on this life long journey.
What do you find most challenging about writing?

Being on the Autistic Spectrum, I personally find the social aspects of writing most difficult. Over the years, I have become accustomed to shadowing people, watching their reactions to the smallest of things, subconsciously listening to the way they speak, in order to improve my understanding of this area.
What advice would you give to people who want to enter the field?

1) Never give up. If you have a passion for something, whether it’s a passion for knitting costumes for dogs, a passion for baking or sports, keep trying until you succeed. If something makes you happy, then it is always worth fighting for.

2) Research is your friend, no matter how hard you sometimes fight. Get to know others in the publishing industry, whether they are writers, editors, or readers. Get to know what they enjoy and compare answers, learn from one-another. Ask if there are groups you can join to give and receive support from those like yourself.

3) Create a blog and post your thoughts in a regular stream of online content. Posting regularly will help people to find your site and to learn more about you as an individual.
What ways can readers connect with you?

I welcome contact via social media and have included a range of links below:

‘Darius, can you
feel that?’
A tingling
sensation seeped into her bones. It pulsed through her, prickling the hairs on
the back of her neck.
‘Darius,
something feels wrong.’
Violetta turned
and was surprised to find Darius facing away. His tall frame appeared to have
frozen beside her much loved tree, his face turned up toward the sky.
‘Brother? What’s
wrong? Tell me.’
Violetta
followed her brother’s gaze.
Darkness stole
over her. Violetta could see the storm a mile off and it showed no signs of
letting up. She flinched as she felt something hit her face. Water? Darius
began to stir, but Violetta’s eyes remained fixed on the sky. She had heard of
rain. It was said that the Air Realm was frequently visited by such cool
showers, but never had she heard of a storm in the Flame Realm. At least, not
since the Almighty Storm of the Ancients.
Violetta felt
her courage flee her. She let out a high-pitched squeal; a reaction to the
hands that had forced themselves around her arms.
‘Shh, it’s just
me.’ Darius stroked the golden waves of her hair. ‘We must get inside.
Understand?’
Violetta gazed
into her brother’s dark eyes. She nodded.
‘Yes.’
‘Good, we
haven’t got long before the storm hits.’
Violetta dove
toward Jork’s ball. She trapped it between her wrinkled skirts, gathering it up
in her slender arms. The rain gathered speed.
‘Darius, I’ve
got it!’ she squealed. Silence greeted her. ‘Darius? Where are you?’
Violetta could
hear raised voices in the distance. They were muffled, likely from inside the
secret passage they had used to get down here.
‘Darius?’ She
spotted a limp shape stretched across the lap of her tree. ‘DARIUS!’
Something struck
Violetta hard in the shoulder, lifting her clean off the ground. Her mouth
formed a silent scream as she flew through the air, clinging tight to Jork’s
ball. To Violetta’s surprise, she landed on her feet.
Violetta’s
vision swam, her shoulder screaming in agony at a chunk of ice that had pierced
the flesh. She glanced about, searching for Darius when something else zipped
past her ear. Violetta tried to put thoughts of the pain aside. She gazed above
her, where the sky had become a blinding white.
Violetta’s
fingernails dug into her ball and the agony she felt appeared to diminish. Her
eyes snapped down to her shoulder, which only moments ago had been spiking with
pain.
‘That’s not
possible,’ she gasped.
Violetta’s skin
was pale and smooth, not a cut or scratch anywhere in sight. Her eyes wandered
down to Jork’s ball, before flocking back to the pale skies above. This had to
be a dream. The sky here wasn’t white. It was a bright and beauteous blue,
always.
Remembering how
Darius had been struck, Violetta returned her gaze to her tree.
‘Darius?’
Her legs carried
her over to him, aching with the sudden chill. Violetta was unsure of what she
was going to find. She drew close and saw the tree’s tangled roots embracing
Darius. His mop of dark hair was slick with the rain, his eyes only just
glazing over.
‘No.’
Violetta knelt
down and gasped at the sight of her brother’s chest. A large needle of ice had
speared his flesh, spilling ruby liquid around its edges. A banshee’s wail
exploded from her.
All sound
escaped Violetta’s world. The edges of her vision darkened, leaving her only
with eyes for her brother.
‘Good Lord,
Prince Darius!’
Clarisse’s harsh
voice cut through the silence. The elderly nursemaid sprinted past, her cold
stare fixed on the limp form of their Realm’s heir. She bent down to examine
the prince’s wounds, shooting an angry scowl Violetta’s way.
‘Just what did
you think you were doing?’ she snarled.
The veins in her forehead began to rise, as
though attempting to escape from their fleshy prison.
Violetta’s face
was devoid of emotion. She could do little more than stare when a startled
scream sounded nearby.
‘My boy!’
‘Mother?’
Violetta got back to her feet. ‘Mother, ice is coming down from the sky. We
must go. Darius said-‘
Violetta locked
eyes with her parent. Tears ran afresh down Queen Isobel’s face as she raced
through the rain to reach her child. Her golden curls, which were usually
pinned atop her head, now hung loose and trailed limply down her back.
No-one noticed
the shards of ice soaring past. Violetta wanted to run. She wanted to warn her
mother before it was too late, but her body felt like it had frozen in place.
She strained against her fear with all her might.
‘Mother, we must
go! Now!’
The queen darted
across to the great oak tree. She scooped up the body of her only son, wailing
against his dark mop of hair.
‘Darius!’
The despair in
her voice matched the feelings that stirred within Violetta.
Queen Isobel
refused to part from her son. He lay there, still as stone, his flesh growing
colder by the moment. Violetta would remember this day for the rest of her
life. She clung tight to Jork’s gift and prepared to race, to grasp hold of her
mother, when another shard shot out of the darkness. A struggling scream filled
the air. It was a scream that would haunt her forever. 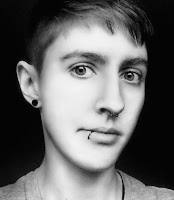 About the Author:
Born in 1993, British writer Daccari Buchelli spends his time focusing on his favourite genre, Fantasy. Having developed an early love of literature, he became determined to create his own magical wonderlands for fellow readers to explore. He spent his teenage years working on several Fantasy novellas, which he has yet to release to the general public.
He has since released the first book in a new Fantasy series, which revolves around young royals and the elemental magic that they possess.
As an active member of the LGBT+ community, Mr Buchelli hopes to help reduce intolerance and bullying by promoting acceptance and understanding of those different to ourselves.
www.buchellibooks.com
https://buchellibooksblog.blogspot.co.uk/
http://mobile.twitter.com/DaccariBuchelli
https://www.goodreads.com/author/show/15093628.Daccari_Buchelli
https://www.amazon.com/-/e/B01L5IH3QY
https://facebook.com/DaccariBuchelliBooks/