Today, we look at THE FIRE PRIEST.

DISCLAIMER: This content has been provided to SHANNON MUIR’S INFINITE HOUSE OF BOOKS by  Virtual Author Book Tours, including the guest review. None of it reflects opinions of Shannon Muir. No compensation was received. This information required by the Federal Trade Commission. 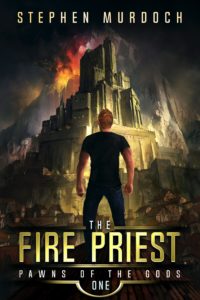 Fire Priest (Pawn of the Gods, Book 1) by Stephen Murdoch

Description of Fire Priest (Pawn of the Gods, Book 1) by Stephen Murdoch

Seventeen-year-old Jack Kulinski is the best mixed martial arts fighter of his generation. So why does fighting scare him so much? In the ring, the sound of swarming bees mysteriously fills his head, and it takes all of his effort to not flee in panic. But when his best friend disappears, and Jack, alone, discovers that he’s been magicked to a terrible land ruled by a murderous god and his violent people, he needs to learn how to face his fears and to fight better than he ever has before.

Praise for Fire Priest (Pawn of the Gods, Book 1) by Stephen Murdoch

“I found myself really into the book and finished it in two days. I was rooting for Jack and Denny throughout the book, I liked the talking rabbit and I really liked Zolin, the soldier, and his buddies. I hated the Fire Priest and Priestess and found myself reading at the dinner table, hoping Jack would destroy them.
I think the world that Stephen created is complex and interesting; I like the references to Mesoamerican culture, history, and names. At first I felt like there were a lot of characters to keep track of, but part way in realized I had them all set in my head and it was all coming together. I’m interested to see what happens in Book 2 of the series.”-Helen, Goodreads

Guest Review of Fire Priest (Pawn of the Gods, Book 1) by Stephen Murdoch

Fire Priest (Pawn of the Gods, Book 1) by Stephen Murdoch

Guest Review by Sol A.

Fire, sacrifice, courage and hope– This book had all of the best elements of a great fantasy novel in abundance. My reading experience with this one was second to none and I can’t recommend it more highly! Like with all great YA Fantasy novels, it starts with a kid, but Jack Kulinski isn’t exactly your average seventeen year-old. Having spent his life being trained in Mixed Martial Arts fighting styles, Jack is more than capable of defending himself against any foe, human or otherwise. However, he comes up against a challenge that he never expected to have to face, in a world where human beings have never set foot before.

Tenechton is a world where fire reigns supreme and the people worship a fire god. The fire priest and priestess see Jack and his best friend, Denny in a vision and know that they must seek to bring both of them into their world in order to offer them up to their god. But, rather than just becoming a sacrifice, Jack has a bigger destiny than he could have ever expected and must face it with no preparation and no help from the life he has always known.

As I said, this book really took me off guard with its brilliance. I enjoyed every part of this and can’t wait to find out what happens next (I’m assuming since there is a #1 next to the title, there will be more books coming in the series). The world of Tenechton was so fleshed out and easy to visualize, I had no trouble following along with the action—and there was a lot of action! This was a fast paced, whirlwind adventure that kept me guessing the whole way through. I’m still thinking about the ending even days after finishing it. Five stars for sure!

Excerpt from Fire Priest (Pawn of the Gods, Book 1) by Stephen Murdoch

Hototo was a potter who had a large nose, upper teeth that protruded above his lower lip, and a streamlined black mustache. When he walked, which he loved to do with his dog, he leaned forward, as if against a great wind, even when there wasn’t one.

Hototo lived on the outskirts of Tenochtan, Tal’alli’s capital. His community was one of many in the foothills of Mount Tezca, but with no prized view of the city center, or its famed pyramid or imposing Dark Palace. He lived amongst other poor artisans and merchants who owned no slaves, hadn’t traveled much beyond the city, and eked out a simple living in the way of small-time entrepreneurs everywhere.

Hototo, though, had real talent. He could create bowls, cups, mugs, and plates that were a pleasure to behold and use. If his customers were so inclined, which they weren’t, they could have hung them on the walls.

He had a wheel in a shed out behind his modest adobe house, and he glazed his wares to perfection in his hand-built oven. His wife, Ayisha, told him he took too long on his products, for not only did Hototo have talent but he also had five children, and every child had a hungry mouth. But Hototo couldn’t help himself. He was an artist and a perfectionist; he couldn’t bear to hold a badly thrown cup, let alone produce one. When his customers used his earthenware, he wanted them to feel the difference.

Hototo was very particular about the clay he used for his homewares. There was marshland an hour’s walk away that had the red soil that performed the way he wanted it to. He didn’t mind the walk; it got him out of his shed and away from his chaotic family.

This day, Hototo took the dirty old bag he filled with clay off the peg on his shed wall, slung it over his shoulder and called for his brown-haired dog, Snap. When Hototo passed through the tiny shopfront attached to their house, filled with his creations on cheap shelves and a small table, Ayisha looked surprised.

“Are you going to get more clay again? So soon?”

“I wasn’t pleased with how the last batch performed,” said Hototo, which wasn’t the whole truth.

“We have plenty of product. Why not help me sell? You said yourself you could go to the Central Market.”

“I have some ideas. I saw some bowls from Baalzmath. They’re starting to glaze with yellows in a fresh way. I wanted to give it a try. I think they’ll sell faster and for a better price.”

Ayisha gave him a look he’d seen many times before: frustration coupled with acceptance. She looked away. “Just don’t be all day about it like you were last time.”

Hototo felt guilty. He would go collect more clay, but he would also see an old lover. They weren’t having an affair, at least not yet. Hototo loved his wife, but life was so complicated and hard. Melia, on the other hand, was easy to talk to. She was a welcome change from hard work and family.

He hadn’t seen Melia in years until recently. She’d moved east for a while, beyond the Dir’in-gee Valley, with a Black Cloak she’d married but that hadn’t worked out, so she’d moved back home to be with her parents. She was still pretty despite no longer being young, but more importantly she liked to talk in a way Hototo and Ayisha seemed to have forgotten. Melia actually took an interest in his art, and he liked to hear about life from beyond Tenochtan where the air was clean and life not so intense. He’d always wanted to travel, but he’d married and had children too soon. His and Melia’s budding romance was the most dangerous of types, for it was a meeting of two old and compatible minds.

A short walk from his house, Hototo came to the crossroads on the way out of town. On one corner was a large outdoor bar covered in ash that was often frequented by off-duty Black Cloaks. Men were thronging it, standing and sitting around plain wooden tables getting drunk. A fight was in process between a big man in a red cape and a smaller wiry one who’d lost his. Most of the patrons’ attention was focused on the fight. To avoid unwanted attention, Hototo crossed to the other side of the street. Snap stayed close by his side. He looked up at his master occasionally for reassurance.

After half an hour Hototo was on a lonely track that wound above Melia’s parents’ house. He was going to nip off the path and descend, but then he saw her black and gray-streaked hair on the far side of a large boulder. How fortunate—perhaps she’d hoped to see him!

“Melia!” he called and picked up his pace. Snap scurried just beside him, happy for the chance to jog.

Melia didn’t turn when he called her name, which Hototo thought was odd. He called her again and then rounded the large rock.

“Melia, it’s me, Hototo—oh, sorry, I thought you were a friend.”

It wasn’t Melia. Instead, the woman was one of the most striking he’d ever seen. She was taller than Hototo, very strong looking with broad shoulders, but beautiful. She gazed back at him levelly with dark brown eyes. She looked him up and down, inspecting him almost, in a hungry way that made him surprisingly uncomfortable.

She stood up and she was even taller than he thought. “A man and his dog. Interesting. Never thought of that. But might be useful.”

Snap barked at her, bared his fangs, and backed away.

“I’m just on my way to the marshes,” said Hototo, indicating the bag over his shoulder. “I’m a potter.”

The lady moved toward him surprisingly quickly and she put out a hand to grab him.

“Hey! What do you want?” asked Hototo.

He became acutely frightened and ran. Snap stayed near him.

Hototo heard the woman snigger behind him.

“Lord, claw my hands,” said the woman in a surprisingly deep voice.

Hototo turned to see the woman growing even larger somehow. Her nose was elongating, and she was sprouting brown fur on her face and body.

Hototo screamed and ran as fast as he could, but she caught up to both man and dog without too much trouble at all. 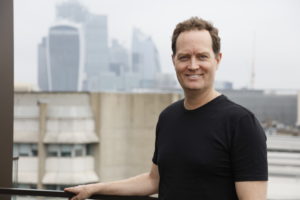 Stephen Murdoch is a writer and investor who lives in England with his wife and three daughters. He is the author of the non-fiction book IQ: A Smart History of a Failed Idea (Wiley, 2007). He has written for various publications, including Newsweek, The Washington Post, and PRI’s Marketplace. The Fire Priest is his first work of fiction. Murdoch is the chairman of two healthcare providers in the UK that provide cutting edge digital and bricks-and-mortar solutions to the mental health sector.

This giveaway is for 3 winners choice of one print or ebook copy of the book, open worldwide. This giveaway ends May 10, 2019, midnight pacific time. Entries are accepted via Rafflecopter onlly. 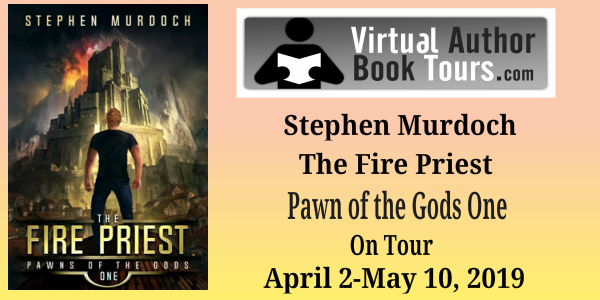